Stamping Out Crime in Germany 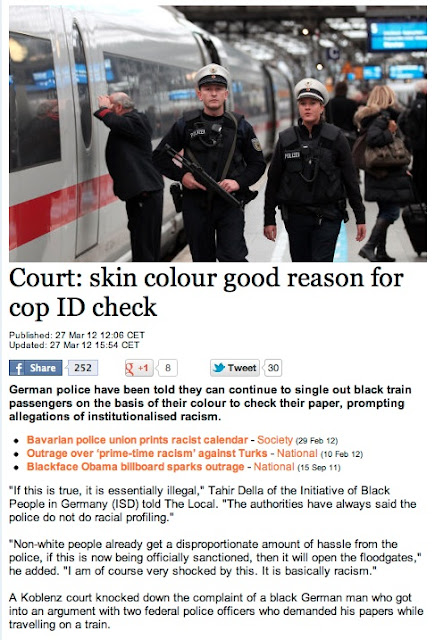 The Germans don't much care if you are outraged by this; in fact, they have moved on. Why can't the rest of the world? Institutionalized racism makes sense when your entire country is being flooded with young people of color. The last vestiges of a Germany that was, essentially, white and decidedly against a multi-cultural outlook are dying off anyway.

If you go out in modern Germany, you do see people from, literally, every walk of life living here. You see people who are going about their business, trying to live their lives, and so you end up feeling bad for the idea that there is resistance to social justice and treating everyone the same. That should be the goal of every society--respect for individuals, treating people equally, and standing against racism should be the hallmarks of an enlightened society.

We have our own issues with this in the United States; this is why it is hard for an American to look down on the Germans who are doing this because they perceive that there is a crime problem. In point of fact, crime is almost non-existent in large parts of Germany. It is a low crime society. There are, however, severe problems in some of the major cities and this is why the police want this tool. They want to be able to deal with crime as if it is a nail, and they are the hammer, intent on hammering everything until there is no more crime. So, it's not enough to point to the fact that this is a very safe place to live. To the Germans, any crime is evidence of a problem that must be stamped out.

The problem is, no one does a better job of this stamping thing than the Germans, so you have to watch and see how far they take this.
on March 27, 2012