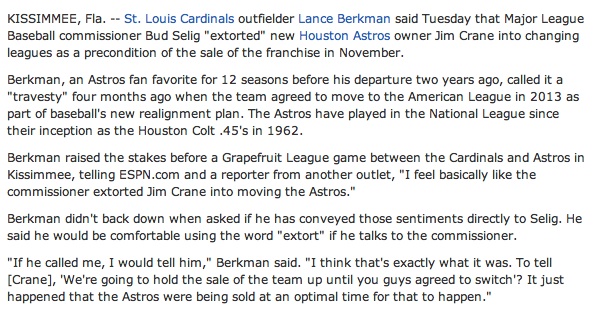 The people who back the institution of Major League Baseball against any and all criticism are probably going to tear in Lance Berkman for stating the obvious.

They should shut up.

There is simply no other way to look at the sale of the Houston Astros--and the rebate that went with the sale--and their move to the American League. It was rife with fraud and paybacks. It was unethical. When will Congress eliminate baseball's anti-trust exemption? Which side of never will that happen on?

Bud Selig destroyed the sanctity of baseball (whatever that means anymore) when he tore the Milwaukee Brewers out of the American League and put them in the National League so that he could have a nostalgic moment for the club that used to play in Milwaukee before it was moved back in 1965.

Berkman will probably have people come after him, and so be it. When you speak truth to power in Major League Baseball, power always wins.
on March 21, 2012
Email ThisBlogThis!Share to TwitterShare to FacebookShare to Pinterest
Labels: Baseball, Business, Editorial, Justice, Law, Legal, Major League Baseball, MLB, Money, Opinion, Scandal, Sports