The Safety Net Is Hardly Ample 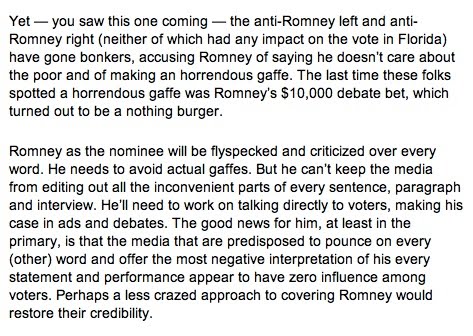 This is where you can glean a little insight into what really ails the conservatives who are trying to defend Mitt Romney. The Washington Post's Jennifer Rubin, who is wrong so often it doesn't even matter what she says anymore, can't admit that Romney is a virtual gaffe machine, and he is so out of touch with voters that defending him at this point is like trying to stop a hurricane with single sheet of thin plywood.

The dwindling turnouts, the excessive dollars-to-votes ratio, and the overall lack of enthusiasm for Romney spells the kind of doom that accompanied the likes of Bob Dole and John McCain to the polls. Republican voters are not flocking to the Romney banner--only the establishment embraces him because he is the least-threatening crazy person now running for office. Romney is the candidate who functions as the inbetweener for a party on the cusp of institutional insanity.

The only thing keeping the Republican Party alive right now is the indifference of the American voter. An engaged, informed electorate wouldn't vote for current Republican policies, and the Republican establishment knows it. That's why it needs Romney. He is the candidate who will allow them to cling to a losing strategy of obstructionism and demagoguery. His defeat will see the elevation of the real crazies who have gone total wingnut to even higher acclaim. Eventually, this regional party will exist on bile and fear alone.

When Romney said that he doesn't care about the very poor, and qualified that by saying that there is an "ample" safety net, his gaffe was pretty clear. The safety net sucks. The safety net is coming apart. The safety net is, essentially, a joke and people who are poor suffer mightily in this country. In the wake of Katrina, we are still ignoring race, class, and poverty in this country. We are still ignoring the plight of millions of Americans who have been permanently driven out of the workforce. We are raising a generation of kids who are being fed garbage every single day, and the health problems they are developing will strain that safety net even more.

Romney doesn't care. And Jennifer Rubin is deluded enough to think that his not caring is the sensible way for a candidate for President to act.
on February 02, 2012