The Kennedy Legacy Is Whatever the Media Tells Us It Is 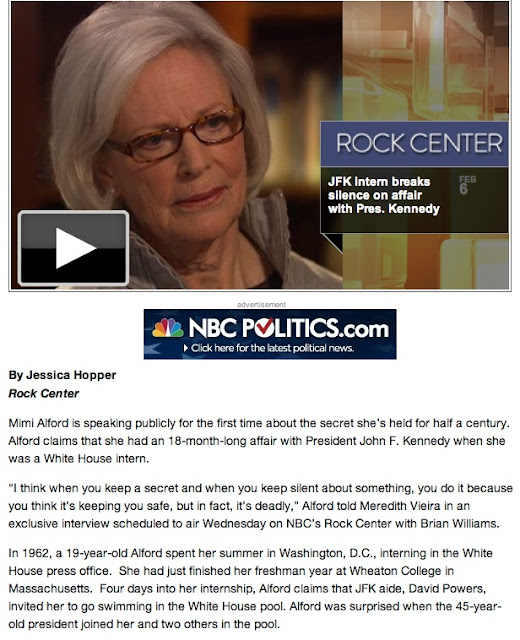 Bless this poor woman's heart, she has had to live with the burden of having been the lover of John Fitzgerald Kennedy when he was President of the United States of America for fifty years now. Hey, everyone has to sell books. I'm sure she'll sell enough to make her retirement more comfortable.

I don't think there are any serious historians who much care one way or the other. She may offer certain clues as to how Kennedy conducted his affairs, and that could be historically significant to whoever decides to write another book about his dalliances. But the legacy of Kennedy is pretty much cemented now. The media believes him to have been a great president who had an enormous impact on American history. I think the more accurate reading of him would be "not much accomplished, served in office for too short of a time, and was rated largely on form over substance."

If half of what you read about him was true, he should never have been President. His addiction to painkillers and his serial adultery left him open to all sorts of things. Can a President be blackmailed? Well, I suppose it could have been possible. Generally, a President should not engage in activity that could leave him open to being blackmailed. Clearly, Bill Clinton didn't care and would not have allowed himself to be blackmailed. He was willing to lie to investigators, but he ultimately owned up to what he did. The public forgave him.

Don't people get tired of being told what is significant and what is meaningful? I don't care what this woman did fifty years ago. Why should anyone care? Why is MSNBC inundating people with what she has to say and why is NBC giving her such a forum? There are women who had affairs with Lyndon Baines Johnson and Dwight Eisenhower. Would they get such a breathless airing with the public? Pretty much every modern president comes with an allegation of having had a mistress or two, although I firmly believe George W. Bush may have been the purest and least adulterous of all of our leaders, except for perhaps John Adams. Does that make him "better" than Kennedy? Well, he did accomplish a great deal more. Whether his accomplishments were good or bad are evaluated exactly where a person falls on the ideological scale. And that's true with Kennedy. He was largely reviled by conservatives in this country; no one seems to remember much about that, either.

This obsession with sex and powerful politicians is boring. It's really only of interest to substance-free outlets like NBC News which is trying to make Brian Williams interesting. Perhaps he should openly cop to screwing his interns.
on February 06, 2012