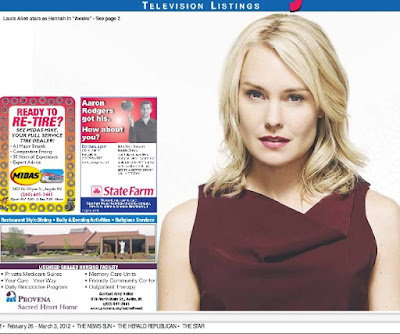 Over on Scribd, I noticed this upload for the television listings. I'm not sure why it's an issue, but front page advertising and the promotional photo of Laura Allen both seem to be in some sort of conflict with one another.

Even here in Germany, the television listings magazine feature a beautiful actress in some benign pose. The expressions are interchangeable and the colors all look the same. Only the actresses change, and they are usually blonde.

But this is an American television listing insert for a newspaper that slaps ads right on the front page. Do the people who licensed the image of actress Laura Allen know this? That their client could be misconstrued as endorsing the images of the ads that appear next to her on the cover?