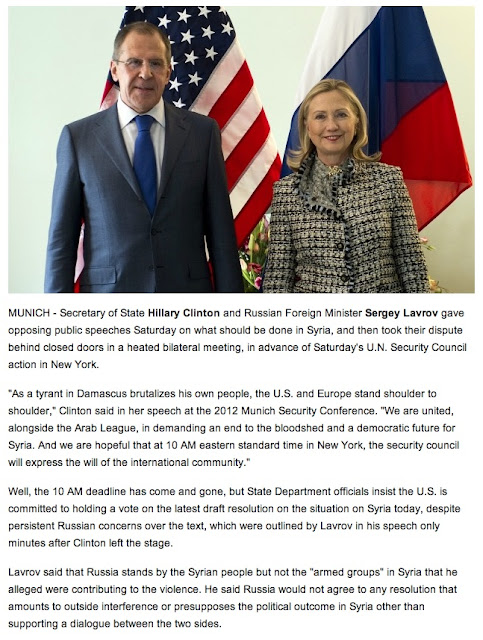 Watching two diplomats go at it in public is like watching an intellectual prize fight; all the better that it's Hillary Clinton and the Russian Foreign Minister, whose name is Sergey Lavrov. This prize fight goes to Clinton, hands down.

I have to give her, and the Obama Administration, a great deal of credit for being on the right side of the Syrian debate. American troops are probably going to have be considered for some sort of stability operation; as far-fetched as that seems, I wouldn't be surprised to see it happen. So, there's the debate over what to do and whether or not to become involved.

And what a debate it is--the Assad regime is conducting an unrestrained, bloodthirsty crackdown that everyone can plainly see. The world community has to get involved in some measured way when a regime becomes overt in the way that it slaughters its own people (Russia knows a bit about this, but it would be impolite to bring up things like Georgia, Azerbaijan, and whatever else you want to throw in there).

Lavrov, knowing full well that the repressive history of modern Russia over the last twenty years or so equates to several Syrias, found a way to block action and give Assad more time to kill his way out of power. Lavrov knows that an Assad is a temporary thing, and his calculations might be towards favoring some party that is waiting in the wings or it might be to keep the killing underway in order to weaken all of the parties concerned so that Russia can enter negotiations with whoever wants to buy more weapons.

Selling weapons is pretty much all Russia has to offer. It has exactly one base outside of the territory of the former Soviet Union, and it's on Syrian territory. It sells weapons to the Syrian regime and it functions as the sole toehold in the region for the fading Russian empire.

Lavrov is quoted trying to sound high-minded about keeping out of the internal affairs of other countries. He is delusional, however. Syria is a rapidly failing state that will destabilize the Middle East quickly if it progresses any further. Once Syria comes apart, Lebanon comes apart with it, and that's when various groups will jockey for position. Jordan's stability could be threatened as well, and, at some point, Israel will either decide to take steps to ensure that its borders are secure or it will merely sit back and watch everything go up in flames. Who knows?

I don't care why China did what it did. It was either money or weapons, take your pick.
on February 05, 2012