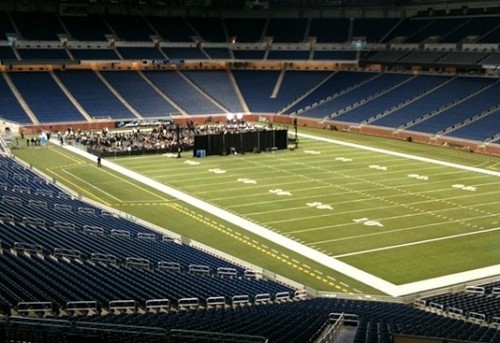 That is the presumptive Republican nominee for the Presidency in a sea of empty seats. Nobody's buying what Mitt Romney is selling.

This has to be a severely crushing psychological blow to Romney and to the Republicans who currently support him. If he loses Michigan, it's not over for him but it does mean that there is the distinct possibility that vast numbers of Republicans might abandon his candidacy and turn towards Rick Santorum.

When you see the facts staring you right in the face--no one is interested, no one cares, no one wants to go into a football stadium and hear him speak, no one wants to engage with him as a candidate and get on his bandwagon--then there is little hope left for the idea of unseating President Obama. Romney isn't even corporate enough to be considered a possible winner. This is a man who has lost, and who has lost so badly, it's a wonder he still has a smile left in him.

I'm also encouraged by the fact that the vaunted get out the vote system in the Republican Party is now pretty much a thing of the past. In all of the Detroit area, there was no attempt to draw ten thousand Romney supporters. There should have been buses parked at nursing homes, shuttles to bring people in, and there should have been incentives handed out to get people to show up. Even that would have been understandable. Instead, the indifference shows that Romney has spent his money like a fool. No one wants anything to do with him, not even for free, not even for a chance to walk inside of a football stadium and mingle with the presumptive front runner of the Republican Party.

My belief is that the status quo wants Obama to stay in office. He's just corporate-friendly enough to be a two-term President.