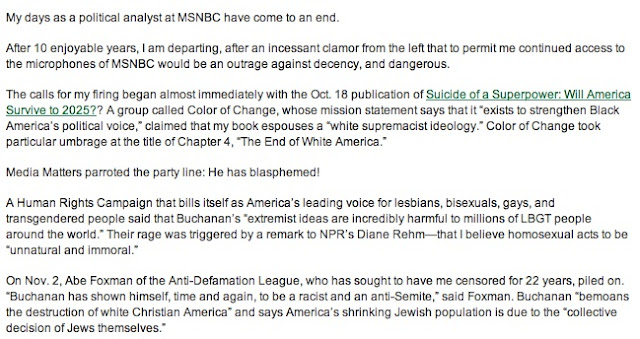 Pat Buchanan has had his Grandpa Simpson moment, and now we can all breathe easier.

For those who haven't bothered to pay attention, his days as a highly-paid pundit have ended with one of the cable news networks. This is hardly censorship and it is hardly even a news item. There is this belief that a television network has to employ people who have different points of view and that they have to be people of substance and quality in order to be taken seriously.

You cannot explain this to free market conservatives, but, when the free market overwhelmingly rejects their nonsense, they think it is censorship. If someone could make money trading on his analysis, they'd be paying him for it as we speak. If the government cannot hand out welfare, why should a television network hand out money to someone who has no ability to draw viewers, stimulate meaningful conversation, and enhance the understanding of a subject? Let them make money; in the marketplace, no one's buying what Buchanan has to sell. If this cannot sink in with people like him, so what? Let him think he's being censored.

There is no one employed by Fox News who can even claim to have Buchanan's long resume. They prefer jokes and clowns over there when it comes to "opposing" points of view. The mere fact that anyone was still paying Buchanan for his opinion into the second decade of the 21st Century is baffling enough. Here was a man who cut his teeth writing nonsense for Spiro Agnew. How did he even last this long?
on February 17, 2012