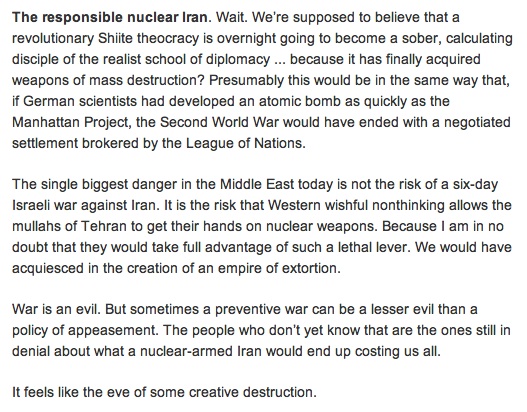 Thankfully, I never bought into the idea that Niall Ferguson had anything useful to say.

In this delightful column, he calls for all-out war and says that no one should fear an Iranian response to being attacked. Well, why don't we all just attack then, right?

The problem is, Ferguson is missing large chunks of modern history. This is why he so lazily reaches back for a World War II analogy. Everything that has gone on since then, when calculated to include nuclear weapons and nuclear deterrence, is far more complicated than dreaming of a joke that ends with Nazis and the League of Nations. Heh, indeed.

He is an unapologetic believer in the idea that Israel can do no wrong, start no wars, and exists as if it were a helpless bunny trapped between foxes and wolves. Ferguson knows that the Iranians are far from ever having the capability of developing a nuclear weapon and that, if they did, the Israelis, having over 150 nuclear weapons of their own, would serve as a wonderful deterrent. I'm assuming he understands that no one--and I repeat, no one--really believes that Israel is going to sit on its weapons when attacked and do nothing.

Perhaps this is what people fear the most–an Israel and an Iran forced to deal with the fact that they can’t use their own nuclear weapons for fear of being attacked with nuclear weapons.

Well, weapons for everyone then. Let’s have some creative detente.

Nations that are attacked rarely roll over and take it. We are losing vast amounts of control in Afghanistan because a group of people with far less money, far fewer weapons and resources, and a great deal of self-determination are waging a pretty effective fight against the most modern military in human history. We have not found detente with the Taliban and we probably never will. Which leads many to conclude that having the most modern military in history is nothing compared with having a motivated, outraged, and marginally equipped revolutionary guard.

Why would we think that Iran would fold up and not fight back? Our superior naval forces can certainly target and destroy modern weapons systems. We have a less stellar track record against irregulars and 4th Generation warfare tactics which is probably what Iran would use to fight back with.

This sort of leads me to conclude that wishing for a war is what chickenhawks usually do; and the idea that destruction can be creative sort of ignores the fact that the people doing the destroying are going to have to pay with their lives while Ferguson can continue writing his nonsense until someone stops signing his checks.
on February 06, 2012