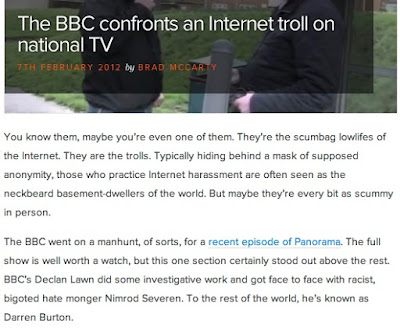 
They have different laws in Britain, and racist speech that incites violence is illegal (I suppose we might consider it a terroristic threat in the United States, or something similar to 'fighting words' and things of that nature).

This sort of confrontation is instructive; the bully flees and backs down, and behaves as if cowed almost immediately. It is only when he is able to get up the courage to throw out an expletive does he try to rise to the occasion and "defend" himself. Of course, without any real skills or abilities, he falls flat and can't come up with anything interesting or funny to say.

That's one terrified little bunny, is it not? Kudos to the journalist who kept at him with questions.

The interesting thing is, Burton is just a poor nobody who has greasy habits, bad hygiene, and little or no creativity or talent. He just spews his hatred on the Internet because it is there. The next time you get trolled, remember what a nobody this man is and take heart. Chances are, whoever is trolling you has a life you wouldn't wish on your worst enemy.
on February 08, 2012