Madonna is Promising Not to Suddenly Appear to Be Nude 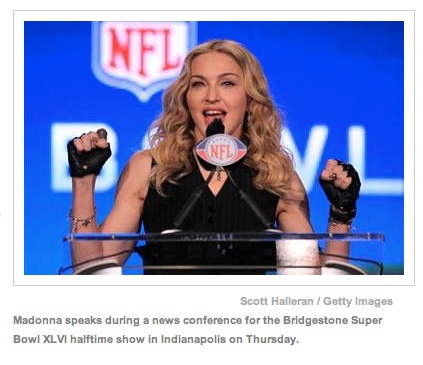 Aside from Justin Timberlake making Janet Jackson not actually nude by accident (and then acting like he was, whoa, you know, not responsible, nope), there are no memorable halftime musical performances at the Super Bowl.

Whoever thought putting Madonna up there would be a "great move" or a culturally relevant event is kidding themselves. Madonna looks great for 53, but her her impact on today's culture is over. She is doing this because people now care a heck of a lot more about Lady Gaga, Adele, Rhianna, Taylor Swift, and Katy Perry. And, you'll note, she's going to surround herself with a lot of people who are younger. In some small way, this is pathetic, but only just.

In fact, pick any of those five singers that I just mentioned and you've got more interest in the half time show than you do it Madonna shows up. I'm not exactly a hater, but, damn. Only Elton John is more over than Madonna.