Keep Your Political Nonsense Out of the United States Army 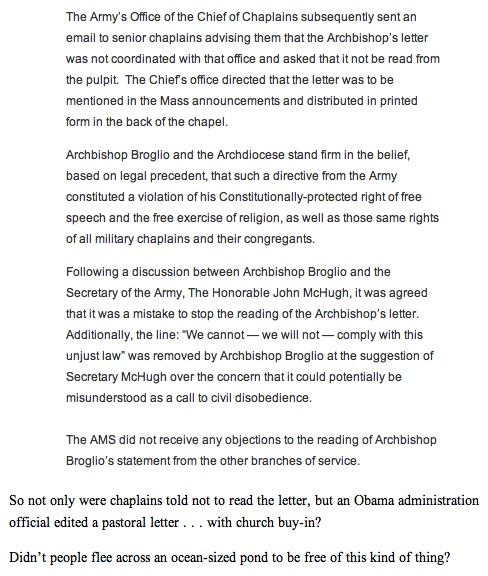 It has certainly been a while since I have had the pleasure of stopping by "K Lo's House of Crazy" or whatever they are now calling the National Review Online. That's by design. I have no urge to increase the amount of stupid in my life.

However, this is as stupid as it gets.

In short, here's the reality. The chaplains in the United States Army are not free to enter political discussions, nor are they entitled to "free speech" when it comes to preaching or reading letters to whoever shows up for their services (soldiers don't usually show up for services; chaplains preach on Sundays to a larger number of civilians who come on post to visit the commissary or the PX). So, in effect, these "letters" would have been read to civilians, not soldiers. An Army chaplain's soul may belong to his denomination or faith and his soul may belong to the Catholic church, but his rear end must follow the Uniform Code of Military Justice. Failure to follow a lawful order means that the chaplain will be quietly removed from the service (they rarely put chaplains in jail, so let's not go there).

Silencing the chaplains is well within the purview of the Army and this was done to keep politics out of the equation. They would not have tolerated anti-Bush rhetoric from the pulpit, nor would they have tolerated pro-Scientology nonsense either. The Catholic Church has declared war on the idea of civilian control of the military in this case because it knows that it cannot influence American Catholics anymore.

American Catholics, in short, don't care what Rome says about anything anymore. They haven't cared for decades. They will use contraception, they will get abortions, and they will do whatever the hell they want when it comes to the issues that Rome is pushing here. The Catholic church clings to these ideas because it has not accepted a charismatic cardinal from Latin America as pope as of yet. I would very much like to see a pope who understands the necessity of population control and stopping the spread of venereal disease. It would be a welcome change for the church.

And as hard as Kathryn Jean Lopez wishes for a continuation of the status quo, there is no chance that it will involve using chaplains in the military.
on February 04, 2012