Chipotle is Not Apple 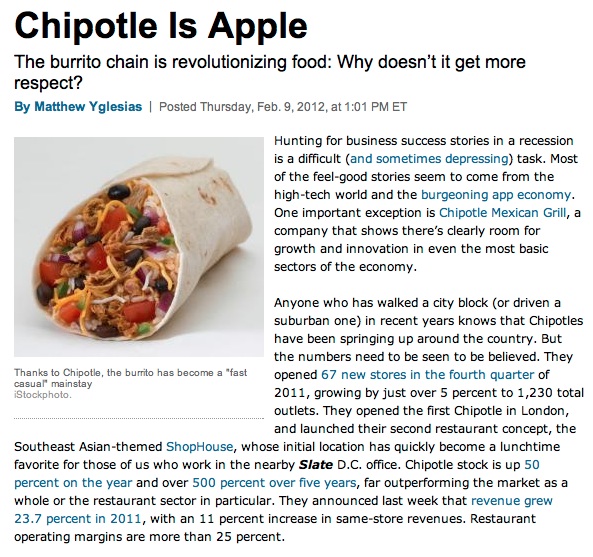 This is the kind of hyperbole that would normally drive someone crazy. What Matt Yglesias is trying to do is use the recent growth of the Chipotle restaurant chain to justify picking someone to be the "Apple" of the fast food business. The problem is, Chipotle isn't going to be Apple, ever, because Wendy's has been Apple since before there even was an Apple.

If you think about it, McDonald's is Microsoft and Wendy's is the perfect antidote to McDonald's. Everything that Wendy's does is better than what McDonald's does, and Wendy's doesn't try to be anything other than a burger restaurant. They have a never-gonna-go-away slice of the market and a clientele that won't ever abandon them.

Chipotle is a fantastic restaurant, though, and I miss eating there. I miss their food like I don't miss any other chain's food because of the quality of what they make. Chipotle is extremely good at organizing and running their outlets. When you go into one, the place actually has the feel of what a fast food restaurant should be. You line up, you tell the preparer what you want, and then you pay. You can be in and out quickly or, if there's a line, in a relatively short amount of time.

The food that you get is damned good. The problem, though, is that even if it is damned good food it's a food that a significant number of people just won't eat and won't try. In 2005, for example, only 16% of Americans listed Mexican food as their favorite. I think that those numbers have increased, but by how much something I just couldn't find recent data on. Then there are the politics that go with certain restaurant chains, Right-wing nutjobs notwithstanding. America has already embraced Taco Bell, but will they embrace Chipotle's? I think that there will always be a price difference that Yglesias has overlooked.

Chipotle's is significantly more expensive than the top restaurant chains. Like Apple, they charge more but provide a better product. The problem is, factors like store location, a lack of a drive-up option (the Chipotle restaurants that I have visited have all lacked this feature), and competition from places like Five Guys is always going to hold them back. How they get over these limitations will be the deciding factor in how they grow and expand further. One of the Chipotle restaurants that I used to visit was located inside of a mall; perhaps they can find a way to get themselves into every mall in America.

The secret of Apple, though, is that you don't need everyone. You need people who have money in their pocket. And I think Chipotle has an advantage here. They use excellent food resources to provide a great product. They don't need everybody, but they do need to get a lot bigger before anyone can consider them the Apple of the fast food world. And, really, how can a fast food chain be equated with a company that makes and sells high-end electronic devices?
on February 11, 2012