Are You Better Off Today Than You Were Four Years Ago? 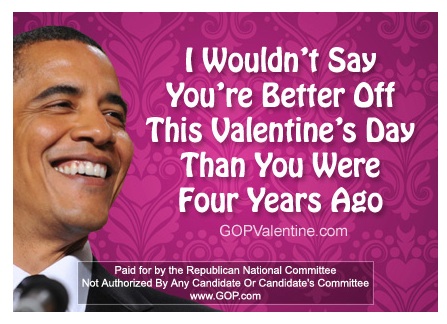 I certainly hope that this becomes the centerpiece of the 2012 election. For anyone to say that they are not better off today than they were four years ago is a tragedy, but things are looking up. Not only did this president stave off a second Great Depression, he saved the auto industry, killed Osama bin Laden, and has put in place policies that are creating jobs, fixing health care, and he is bringing the troops back home.

The Republican Party is insane if they keep trying to run with the lie that people are not better off. They most emphatically are.

There's a reason why Republicans don't do funny; the cards at the link are predictable and lame. Someone clearly wanted to do black jokes and make fun of women and how they look but couldn't get that past their supervisors.
on February 15, 2012