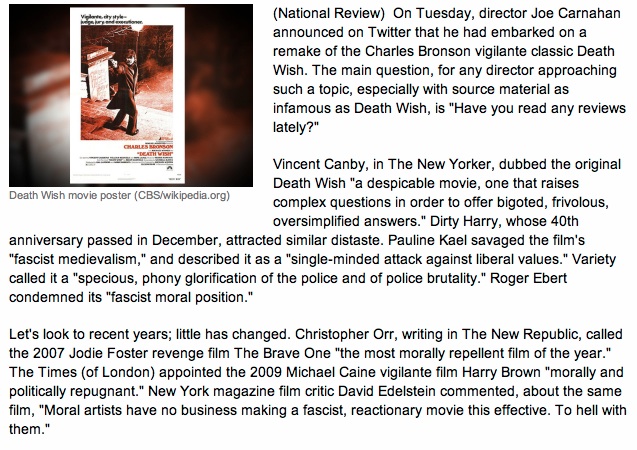 Anthony Paletta tries to discover some tenuous link between "the left" and a general dislike for vigilante films. The problem is, he fails to identify what this argument is really all about. And when it comes to vigilantes, or vigilante films, this is not about justice, and it's not about violence. There is no link between the two. Thinking people reject the idea of the vigilante, and that's all there is to it. Paletta simply doesn't want to admit that there is no rational argument that can defend celebrating cinematic depictions of vigilantism. In short, he doesn't know what it's all about.

It's about the rule of law.

And the rule of law is very simple. It says that we put aside our passion, our desire for revenge, and we embrace the belief that our society is a better one if we accept the dispassionate judgement of the law. Dispassionate judgement means that all of the evidence in a case is heard and that a person has the right to face their accuser. It means the application of fairness in pursuit of getting as close to the right answer as possible. Even though fairness is impossible to achieve, our system is based on the idea that everyone should get a fair hearing and that judges are accountable for their actions through the appeals process and so on and so forth.

Thinking people accept that, from time to time, someone guilty is going to go free. But we accept that because it would be far worse for someone innocent to go to jail.

And so, Paletta's piece isn't for thinking people. It's a smear of everyone who has ever spoken out against vigilante films and it very deliberately leaves out their reasons for not approving of them. It associates fairness with weakness, which is a good trick when it comes to arguing that there is something wrong with "the left" in this country. If you want to see a perfect example of being soft on crime, subverting the judgement of the courts, and denying justice, look no further than Republican Governor Haley Barbour's monstrous pardons of convicted murderers.

Anyway, Paletta's arguments are old hat, left over from the 1970s. Back then, crime was in a sort of heyday in the United States. Now, we have whole television networks devoted to criminal trials and things of that nature. People get worked up about the idea of due process, but, when it comes to their own freedom, erring on the side of the rule of law wins every time.
on February 04, 2012