You Have to Dance With Them What Brung You 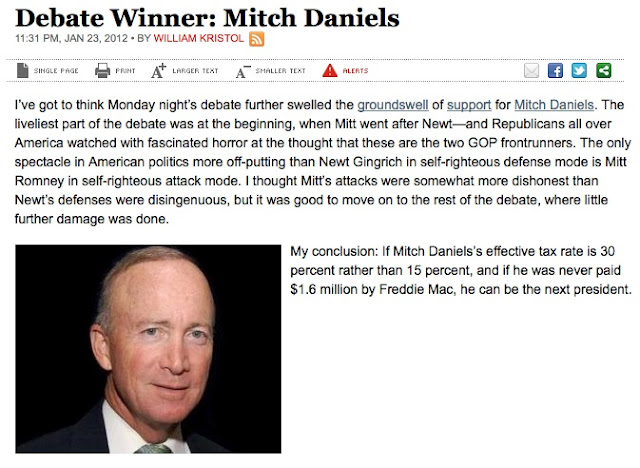 William Kristol wants to be able to push himself back away from the table at the club and look off in the distance and tell the assembled, hushed members of his enormous posse, "I knew we were going to lose to Obama, I just knew it!"

If Mitch Daniels actually was running, they'd be obsessing about his bald head (Mitt's got better hair!) and his lack of Civil War knowledge (Newt's our General Lee!) or his failure to put Indiana on the gold standard (Doctor Paul will Save Us All) or his inability to make the gays go poof! and run away (I don't know if Santorum has accomplished this yet, but he's praying to Jesus for extra powerful smiting powers). They'd be smashing his record, looking at his wife funny, or wondering why he isn't conservative and insensitive enough.

I mean, really. Indiana? Does Kristol think being governor of a small, failed state matters? I thought Bill Clinton was proof that it did matter.

The Republicans are headed for a demographic election battle that they can't win. They've demonized Hispanics for the better part of the last decade. They've insulted women every chance they get. They don't even bother pretending to hide the Confederate flags anymore. They can't get enough people who have skin that is darker than a whiter shade of psychedelic pale to even consider voting for their candidates. They are really, really good with the white, Southern males, though.

All of the traditional indicators of Presidential electability or re-electability are thrown into the air. People may not be happy with who is President but they're not going to embrace crazy and trust the country to someone who can't articulate anything past the usual dog whistle responses.

I mean, if the American people suddenly fall asleep or become collectively stupid enough to elect one of the four remaining Republicans to the Presidency, then it will be a four year ride with Mr. Toad on his Wild Ride, and nobody's getting off without skinned knees and elbows and a massive concentration headache.
on January 24, 2012