When Did Beyonce's Security Detail Become a Private Militia? 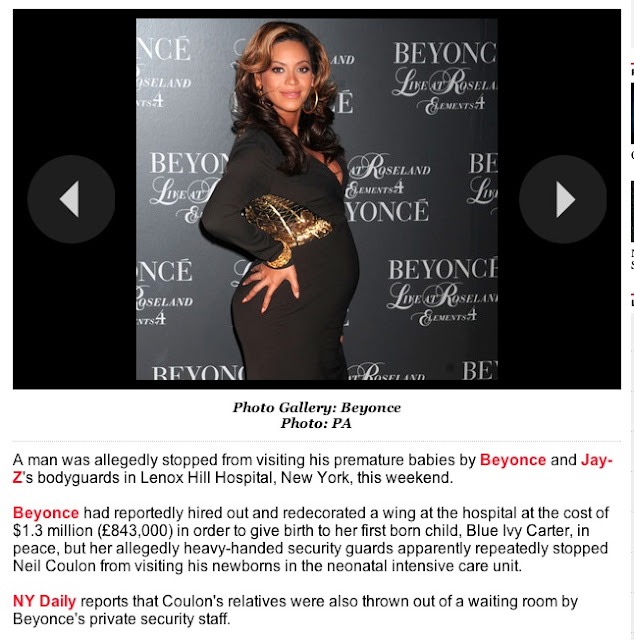 It sounds like the people who have been hired to protect Beyonce have formed their own private militia; they can do whatever they want and no one can touch them. The hospital in question is apparently willing to be bought off as well. You suckers with no money can hoof it down to the next hospital if you don't like what's going on.

Of course, there is no reason to involve law enforcement. Their concern is for things like Occupy Wall Street, which is where you have unarmed people protesting in public. Is there anyone who doubts that Beyonce's security detail is armed and willing to use weapons? Is there any chance that this will get on the radar of anyone who should maybe look into whether or not these security personnel are entitled to push people around?

No, I didn't think so. Money buys a lot of things nowadays, and one of those things is your own private security force. The law need not bother with them because they have purchased a place well above the law.

Apparently, Lenox Hill Hospital is doubling down and trying to protect the Carter family from being criticized. However, if you read to the bottom of the article, no one can really explain why the security cameras in the neonatal unit were taped over.

Now, I don't know why that bothers me, but it does. Neonatal units are, because of their nature, highly sensitive areas. They should be under video surveillance at all times, and whether there was a security guard in the area is simply not relevant here. For the safety and protection of everyone who uses the facility, the cameras should be recording the comings and goings of any and all people who visit that area.
on January 11, 2012