The Right's Utter Lack of Decency and Shame 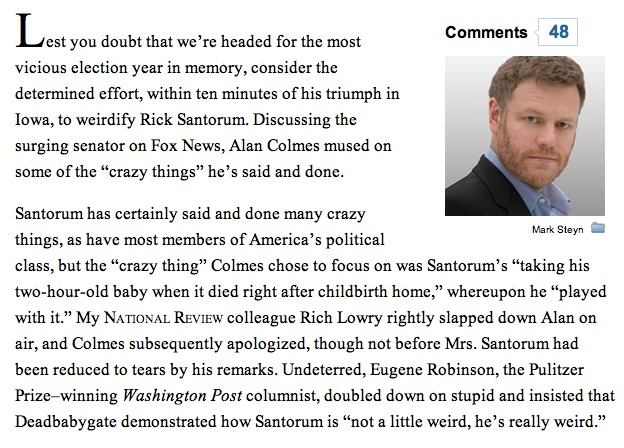 When Mark Steyn refuses to defend Rick Santorum's crazy behavior, then you know we're in for a wild ride with this piece from him. And his modifier, "as have most members of America's political class" is weak tea, indeed.

Really? Which members of America's political class can even approach Rick Santorum with their own behavior? I'd certainly like to hear Steyn name names because he knows he can't. He knows he cannot defuse the weirdness factor of the incident with the Santorum's deceased infant. He knows that mainstream USA would look at that and recoil in horror; not because of some red state/blue state dynamic or because of some pro-choice/pro-life position but because it was pretty effing weird to begin with and utterly and completely out of the mainstream. Americans deal with their grief in these matters privately and responsibly. Rick Santorum chose to make a political statement of his own pro-life beliefs and made sure there were photos taken.

He is a ravenous anti-gay, anti-choice, anti-freedom candidate. He is the antithesis of the libertarian segment of the Republican Party because he firmly wants to inject himself into the bedrooms of Americans and because he reserves the right to scold anyone who has sex without making a baby. He lives in a deranged world of saintly behavior and there are few, if any, high rolling Republican sex freaks who want to have to answer to a Santorum justice department that is shining flashlights into bedroom windows in order to figure out what's what and who's who and where the lubricants are being deployed.

Santorum is a cultural wave candidate, and there are still enough people who are old enough to have stopped having sex altogether who are mad at the people who still do have sex who will champion his cause and sweep him to the nomination (the Republican Party is aging and white, and this is the perfect constituency for a finger-waggling prude).

Santorum is probably doing so well because John McCain, for all of his crotchety ways, was a man who was having copious amounts of sex with a beautiful woman and didn't care who knew about it. He had a daughter who was practically born spilling out of her halter top and he had that charming mystique that men who know how to live their lives possess. McCain was the man who wasn't afraid of a dirty joke; Santorum would flee the room as soon as the premise was established. This is what an empty soul looks like, in terms of a political party. McCain was awful. according the the Republican elites, but Santorum is somehow better than a decorated war hero? Because he hates the naughty bits and wants everyone to sleep in separate beds if they're not actively trying to squirt out a kid?

So, you can ignore Steyn's attempt to make the left look bad. The left wants you to have dirty movies and procreate on your own timetable. The left wants you to have things like Planned Parenthood so that you can make informed choices about your life. The very existence of the welfare state conservatives hate is proof of enough empathy to render his point ridiculous. The left wants people to have unemployment insurance and health care coverage so that their lives don't spiral down into despair. The left wants people to have access to education and upward mobility. The left is the only thing standing between this country becoming an even larger banana republic where a wealthy few live in walled compounds policed by an armed constabulary and protected by a secret police force.

The right seems to want Rick Santorum and his deranged need to smack people on the genitals and make them stop living like human beings. And that's a demographic problem that isn't going to lead to electoral victory in 2012. Are we really going to elect a prissy scold in 2012? God, I hope not.

In short, how can Steyn claim anything bad about the left when it's pretty much the only thing offering Americans any kind of tangible freedom anymore?
on January 08, 2012