There are thugs working for Newt Gingrich. Mean, twisted people who know how to get things done and make people hurt. These vicious punks know that their jack boots and heels are excellent weapons against people who stand in public and exercise the right to free speech.

Have a look at how classy the Gingrich Campaign has become: 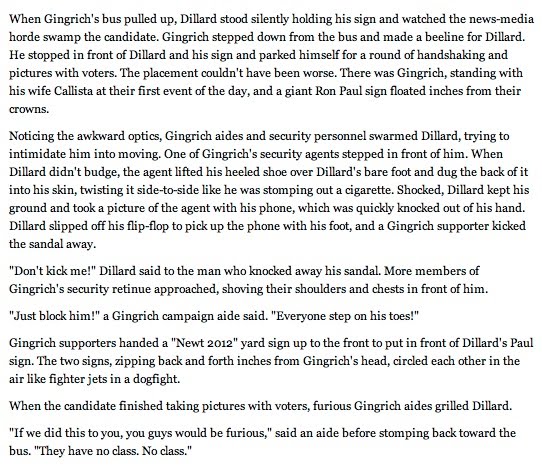 Where were the police? This was an incitement to attack a human being. This man was assaulted and someone should be arrested for it.

The Gingrich Campaign is now brutally trying to establish a long game. They have just been beaten in a major race and they are now preparing themselves for the long haul. You can sense the mentality that has taken hold--if Gingrich doesn't get the nomination, no one will. And they will crush their enemies and do whatever is necessary to make that happen.

Gingrich will, of course, start complaining about the heavy-handed, violent tactics of his enemies and speak, at length, about how he has been the victim of thuggery. And then he'll go right on giving his aides pointers as to how to jab people in the ribs or use broken glass and boot heels to get what he wants.
on February 01, 2012