The Inevitability of Mitt Romney 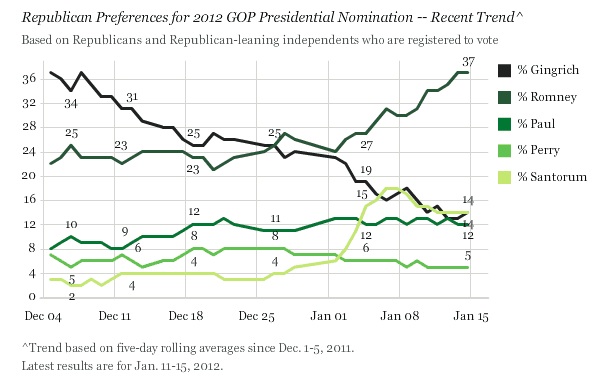 The only way the Republican Party is ever going to get rid of Mitt Romney is to let him run for President and lose to President Barack Obama.

This race will finish two careers. Both Newt Gingrich and Rick Perry are vying for the title of living laughingstock of the Republican Party. No two candidates had more handed to them and no two candidates did more to throw it away faster than these two did. Does anyone miss Michele Bachmann? No, of course not. She'll be the vice-presidential nominee.

Anyway, this is an interesting graph. It shows the moderate improvement in Ron Paul's support. Each and every time he spins his nonsense, another disaffected voter who hasn't been paying attention suddenly comes to Jesus and jumps on his non-bandwagon. There are many lost souls littering the American political landscape. Ron Paul is their Jesus. But he's a weird Jesus, and he won't take them to the promised land and he isn't going to do the loaves and fishes trick. He might get them to believe that he walks on water, but that only speaks to the gullibility of an uninformed electorate.

Anyway, after South Carolina, it's over. Romney will spend the rest of the year failing to adequately run for President. No one will be enthused by his candidacy. And when he's gone, he'll be gone. They'll never tolerate his nonsense again.
on January 17, 2012