The Case Against Andy Dick Has No Merit 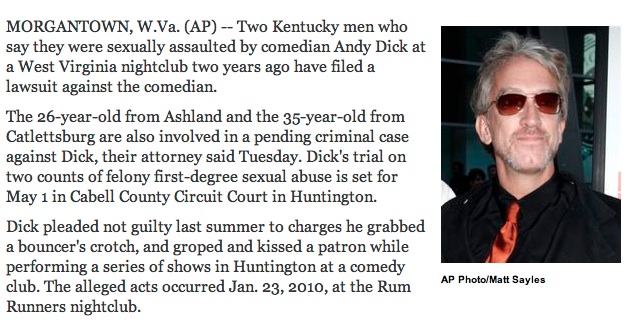 When you go to an Andy Dick show, I think you can expect to be shocked, surprised, and maybe even a little entertained. My question is, did these two young men pay money to see Andy Dick without knowing anything about him? Were they expecting Larry the Cable Guy?

The case was filed in order to beat the statute of limitations. This means that the gentlemen in question are expecting some sort of settlement in order to make the case go away. There's a good shot at a settlement, but I think there's an ever better shot that Dick doesn't pay anyone for being in the audience at his show, especially if he can convince a judge that that's what he does.

I used to not be sympathetic, but I am fully sympathetic to Andy Dick these days and I think he's getting piled on here. He does what he does. And my opinion about him changed because of Marc Maron's WTF Podcast with him back in April of last year. If you haven't already done so, sign up and give this a listen and decide for yourself. There are few things on the Internet worth paying for, but WTF is worth it and I can say that because I'm not getting a dime for saying so.
on January 24, 2012