That's Not What a Good Samaritan Means 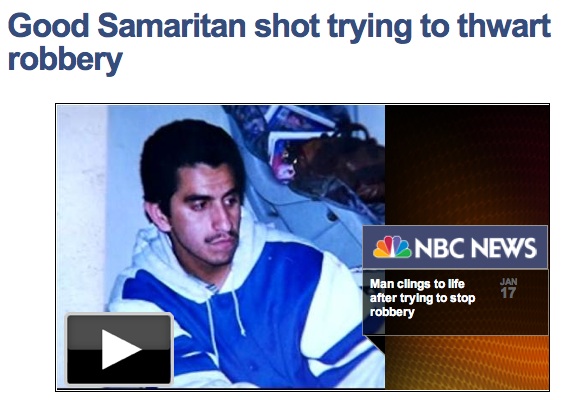 I sympathize with the family and friends of Mr. Alvarado, but he is not a "Good Samaritan" and the use of that term in the context of the story and the headline here are misleading and flat-out wrong.

A Good Samaritan is someone who selflessly comes to the aid of another person. In the legal context, the "Good Samaritan" laws typically excuse a person who tries to render aid to someone else from being sued for liability or damages if they have made a reasonable attempt to help someone else.

Mr. Alvarado should not have attacked that robber. I realize that is is difficult to accept being robbed, but in practically all cases, the best thing to do is to just hand over the money and let the police handle the situation. In areas where the police are completely ineffective, this sort of thing happens (and it happened five years ago, according to the text of the story).

It's tragic and I hope there is a good outcome. But it is incorrect to call Mr. Alvarado a Good Samaritan because he had no business trying to use force to stop a robbery. I'm surprised that the police haven't come right out and cautioned people not to attack or fight with armed robbers. There has been a celebration of vigilantism in recent years and that's wrong as well.
on January 17, 2012