Stop Being Afraid of China 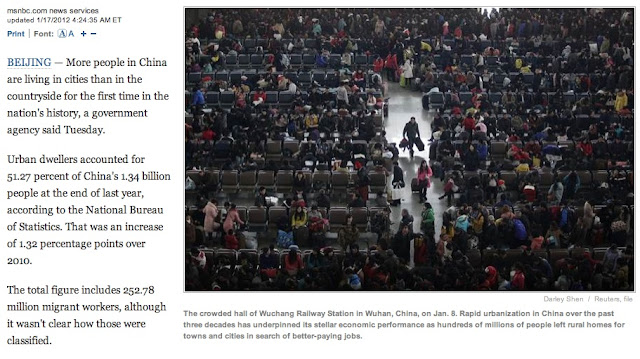 I'm not about to join the ranks of those who fear the rise of China and who claim to see profound developments every time the Chinese government releases some new set of statistics. The world is still trying to get flatter, but the Chinese are still waiting to see what this new globalization looks like.

This means something fairly significant, however. It means the end of the peasant as the basis for China's communist revolution. The peasant is on his way to join the serfs, the farmers, and the tenants of yore. The peasant is no longer the symbol of China's present day reality. The overworked, underpaid, and unhappy plant worker is now the symbol of the new China.

China has a host of problems that undercut much of the recent developments that are coming to the forefront of world economic analysis and consideration. It is a potentially vast market, if only a company can get in there and sell and not see themselves copied or pirated. It is an engine for economic growth and progress if only it can keep its workers happy. It could be the home of the largest middle class on Earth if it can find a way to marry the rule of law to economic freedom and upward mobility.

Societies are measured by their standard of living. China's standard of living has to improve, and soon, and that won't happen unless a certain measure of freedom is granted to people. One of those freedoms has with it an inherent belief that there are competing economic theories as to how to maintain the viability of the largest middle class on Earth. That would be the choice between theory one or theory two, or the process of creating political parties. There has to be a choice because the state isn't infallible. The average Chinese citizen has to be free to choose one set of corrupt bureaucrats over another, if only for a while, so that there can be the occasional taste of what we call "good government" in this country. Progress cannot come from the current Chinese system because too many people are now completely and utterly aware of what corruption is doing to Chinese society.

That's why they need to be able to choose between one set of bums and another set of bums. There's no other way to get the bureaucracy to occasionally do the right thing once in a while.

If the average Chinese person cannot make a living wage while working in a large urban area, expect another revolution. The basis for the old revolution has shifted to the cities and has abandoned the idea of working on a farm for the benefit of others or for a a meager living. Whenever you concentrate a large amount of humanity in a manufacturing economy, social unrest and change are sure to follow. It would be a miracle if the Chinese people living in all of these expanding cities simply rolled over and accepted the exploitation that continues to create a pretty good economy from the outside that is, in reality, a hollow shell built on the misery and toil of a people who are rapidly reaching the end of their patience.
on January 17, 2012