Senator Rand Paul Does Have Some Points Here 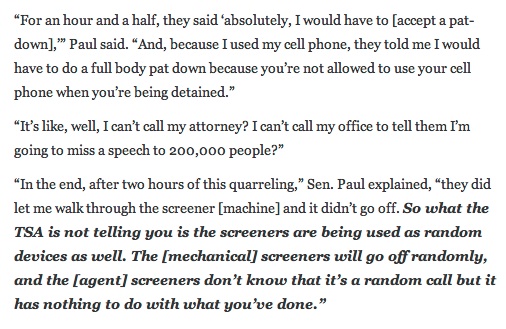 I find myself in agreement with what Doug Mataconis is saying here. What happened to Senator Rand Paul is very much a comment on how the way we travel and secure ourselves is broken. But, there is a part here that is fairly dangerous and that's the third paragraph that I've posted above, which is where he goes off on a tangent. To say that he "knows" why the machine didn't go off the second time is laughable. That's pure conjecture on his part. How do we know that he didn't remove an item from his pocket the second time through?

Is Senator Paul qualified to assess the technology now? As far as that subject is concerned, Senator Paul should be careful about asserting his opinion as a fact.

But, there is one thing I don't get from this story and that is the sense that Senator Paul felt "entitled" or "special" and that's to his credit. There are plenty of people who go ballistic when they are asked for identification or when they are asked to submit to a routine search, and members of Congress are famous for the stock rhetorical question, "do you know who I am?"

Senator Paul is taking a very hand-on approach to this subject, and, out of his indignation, there might be a good debate on these issues. It is a broken process. He should have a choice about being scanned or patted down. He definitely should have been informed of his rights if he was, in fact, detained or in some sort of custody. And everyone needs to be treated fairly and respectfully.

If there's anything good to come out of this, I would say that an assessment of the whole security theater apparatus is long overdue.
on January 23, 2012