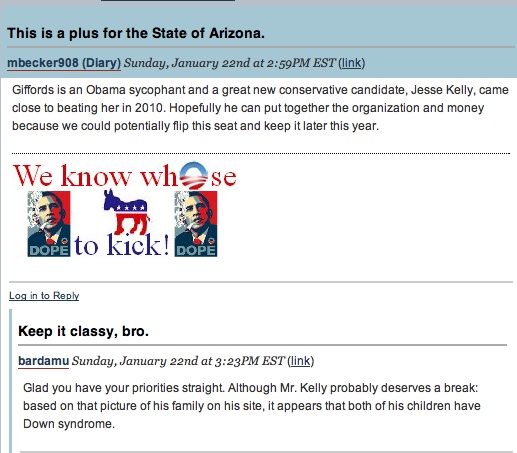 Hey, it's all good. As the man says, keep it classy.

To them, it's about the horse race. Fine. Let's make it about the horse race. How's your side doing right now, Chumley? I guess when the possibility of taking back a seat in Congress comes around, you've got to get your jollies any way you can. But don't get all high and mighty when your side collapses and when your guys run for the exits and leave you holding the flaming bag of turds.

Never forget what this fight is really all about. It's not about finding good people who say earnest, hopeful things. It's about finding people who will fight these assholes every single day of the week and then stay up late on Sunday night and find a way to fight them smarter for another week and for the rest of the year. These bastards need to be marginalized, humiliated, broken, and scorned. They need to go back to Xeroxed newsletters passed around the American Legion. They are the scum of America. They're not worth one more comment.
on January 22, 2012