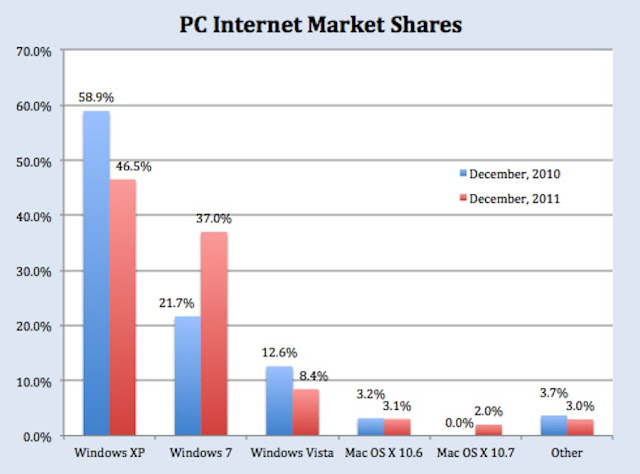 Perhaps love is too strong a word.

People are so broke, they can't afford new computers with newer operating systems. How's that?

I realize that this looks like it is full of weight, but it really isn't. Operating systems aren't anywhere near as important as the computer industry would like to make them out as. What is important is the machine on which they run. You have very little control over what runs on the machine you go down and buy from whichever retailer is still in business. You get what's there, in other words.

I have a retired laptop still running the old system; it has the added advantage of actually working, something Microsoft got lucky with once out of five or six tries.

So, if there are a lot of machines running Microsoft Windows XP, I would think that a large portion of that is being run on older machines that still work and are owned by people who cannot afford to upgrade. People love to upgrade; whether they do or not is based on being able to afford to do so.

Businesses certainly cannot afford to upgrade; I would think that a lot of machines fall into that category as well.

The number of people who actually buy a new PC and install their old Windows XP operating system on that machine is either much higher than is understood or is still fairly low; I would think that, once the economy improves, the number of machines running XP will fall dramatically.
on January 02, 2012