Legal Insurrection Has Some of the Craziest Commenters 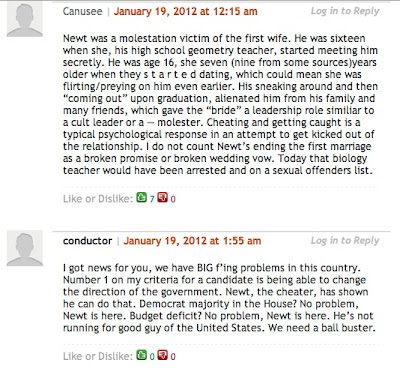 Here are a pair of comments from William Jacobson's Legal Insurrection blog.

I guess I'm naive. I did not consider the possibility that Newt Gingrich should be elected president solely because he had sex as a teenager and because he's a ball buster. It simply wouldn't do any good to point out that, prior to 1995, the age of consent in George was 14, but, really, why expound on all of that? Wouldn't it be smarter to emphasize some other aspect of his candidacy?

This is why you have to scan right wing blogs. Missing this stuff would hurt too much.
on January 19, 2012