I Don't Care What These People Owned 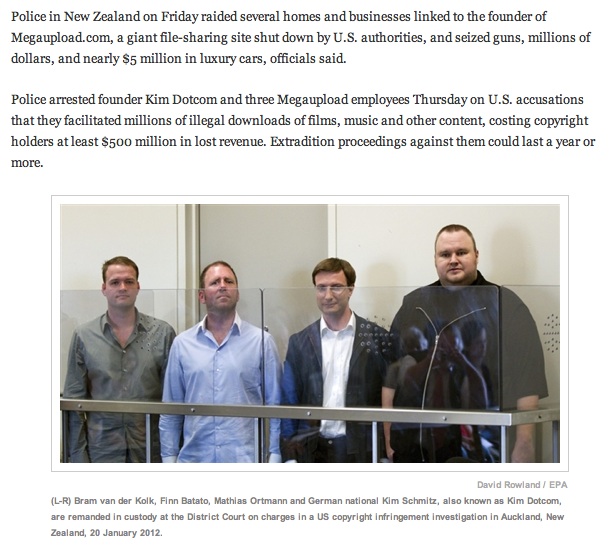 It's pretty clear to me that the authorities are trying to make these characters as unsympathetic as possible. Instead of a simple case of using the rule of law to go after people who are suspected--but innocent until proven guilty--of media file piracy, a complex game is being played with the facts, with the law, and with the extradition treaties of countries like New Zealand.

By making them appear in court in this manner--unkempt, wrinkled, dressed down, and sweaty--the governments of the United States and New Zealand are embarking on a campaign of destroying these men before the judge even has a chance to begin considering the case. We have been treated to stories about the property that was seized in the raids.

I mean, really. Who cares what these men owned? I thought that the media was supposed to serve as the gatekeeper between what they were learning from the government and what they felt it was important to tell the public. Was due process followed? Are the indictments clear and concise? Were proper procedures followed? Are the rights of the accused being protected?

It is nobody's business if they owned fancy cars or guns or anything like that right now. What matters is that their rights are not violated. Then the case against them can be heard on the merits. But the government knows that if it demonizes these men and destroys them before the judge can even issue a preliminary ruling, it will have, effectively, terrorized dozens of other "file locker" companies into shutting down.

This is what a chilling effect looks like, sweaty shirt and plexiglass and all.
on January 20, 2012