I Can't Tell if This is Good or Bad 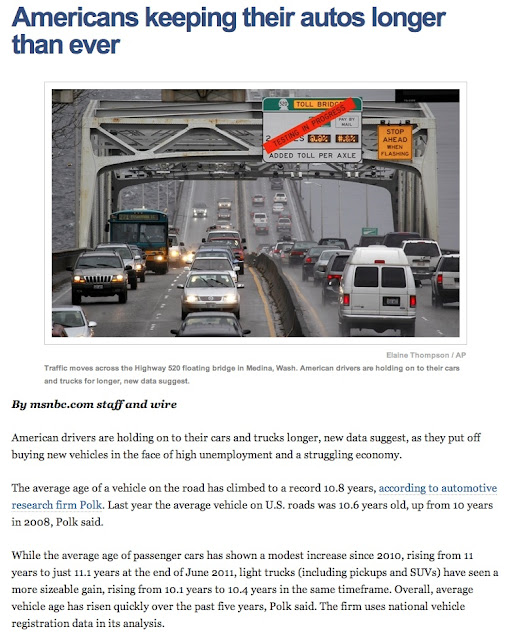 This is another one of those indicators that attempts to say something about our economy. The trouble is, there are good things here as well as bad things that defy an easy explanation.

When people are out of work, it becomes a serious drag on the economy. Their wages aren't going towards future enhancements, like new cars and new products (or upgrades of older ones). They're not paying taxes on their income and they're not paying sales taxes on what they buy. This, in turn, causes the government to come up short. What you put into the machine sustains the machine; thinking that you can stop putting money into it and get the same results is not a serious way in which to proceed. But, yes. You do have to keep things running at a sustainable level.

So, with older cars on the road, you see two things--one good and one bad. What's good is that cars are more dependable and of a high enough quality to stay on the road, on average, for at least ten years. The cars they were making back in the 1980s weren't that good; many of them were of such inferior quality that it was a stretch to get them to last seven years. What's bad is that there will be fewer and fewer new cars sold, and that, in turn will lead to cutbacks in the auto industry and maybe layoffs.

In any event, there isn't an easy answer. I do think we need to be less consumerist in nature and that we need to cut back on some of the things we consume. But I'm not a purist--we do need some consumption and some turnover or our economy will suffer.
on January 18, 2012