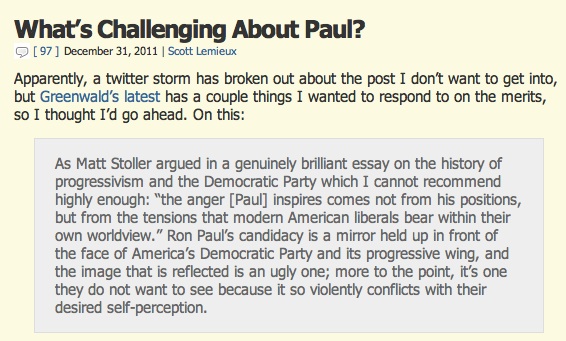 To this idea that Glenn Greenwald is some sort of highly principled defender of the rule of law, I would say, fine and dandy. He defends principles that most bloggers run away from. He is a purist on several issues, and there are no gray areas because to allow for a gray area is to acknowledge the imperfection of the law when it comes to national defense. That's where you have to choose a side--is Obama better than Bush? If not, why? And, yes, you do have to choose sides because it is impossible not to when you take into consideration the fact that "both sides do it."

As for Greenwald, people love him when he's on their side and hate him when he's not. Wait until it's time for him to choose a side. He has never chosen a side--he has always chosen the side of being in opposition to the existing power structure. That's part of his business plan, and this business plan has consisted of never having to stray, as some would say, from "the reservation." He is America's purity troll, and he's damned good at it. In fact, bloggers hate him precisely because he's the best purity troll in the country right now and a damned good blogger. And bloggers run from the reservation because, once you're bought and paid for, you're posting inane drivel nine times a day.

There was no reservation to begin with. Greenwald made a tactical decision as a blogger and as a writer--it is much harder to play defense than play offense. When Greenwald was writing things that liberals agreed with, he was a hero. Now that he doesn't do that anymore, he affects the pose of a principled pundit who has the only correct position on the rule of law. He's very, very effective in arguing his point. It's a shame that he knows that his points don't stand up to any scrutiny when it comes to the actions of nation/states and dealing with internal and external threats. There are no great men, only greatly exaggerated victories and muffled defeats.

When President Obama was choosing his cabinet, it became clear that his administration was going to be dominated by a Rahm-inspired form of political expediency. We now know that a lot of the things that motivated progressives was going to get flushed down the toilet--specifically, a prosecution team for the Bush-era crimes and a focus on getting us out of a financial mess in a Krugman-friendly manner. That led to the loss of two good years, roughly, but a lot of other accomplishments. This country did not go down the rathole, although it seems like it.

Greenwald decided that to be in opposition to a sitting President is a great move for a blogger--one never has to worry about material. Look at how much fun he's had as opposed to the bloggers who have had to defend the Obama administration. He has made bank on blasting away while others have seen their enterprises dwindle away. Want to inspire someone's derision? Start a liberal-aligned blog and say nice things about President Obama.

I'm sorry but his decision had nothing to do with principle. It was a business move, plain and simple. Each and every President of the United States of America, beginning with the very first one, and excepting maybe one or two who died in office, could be described as either tyrants or steadfast defenders of the Constitution, depending on whether or not the person describing them either voted for them or against them. Presidents are tyrants because the Constitution makes them tyrants when the collective political consensus is "protect the United States from x threat." This is why we've had several Red scares in our history. We'll always have Red scares.