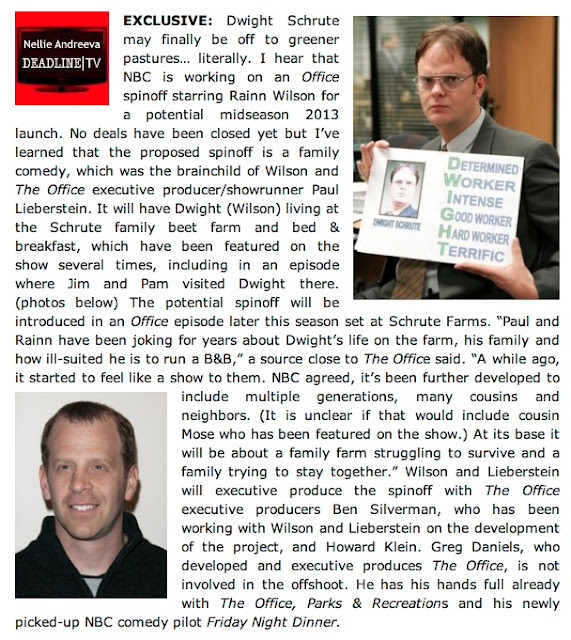 If you follow the link to the Deadline site, you'll get to read about the logic of creating a spinoff featuring Rainn Wilson's character Dwight Schrute. It goes without saying that this is a character worthy of a spinoff and there are only a handful of comparable characters that you could say this about. It makes sense from a business point of view. And, since the Deadline commenters hate the idea and bring the usual "inside baseball" snark, it goes without saying that the general public will probably accept it. In all of blogdom, the commenters on Deadline rival everyone with their ability to pose as industry insiders from their lofty perch upon toldja! mountain.

The new element that needs to be introduced into any Dwight spinoff would have to be a good woman to keep him honest, a buddy who backs him up with a mighty bromance, and an enemy worthy of praise. He needs a nemesis who is secretly just as weird as he is.

This is (almost) the exact formula for the Drew Carey Show, and it's a damned good one, since that show was one of the better pre-Office workplace comedies. It would be a mistake to think that a show entirely about Dwight being socially inept would work; people have to be able to relate to him and watch him interact in meaningful relationships.

Wilson has done a stellar job of creating and shaping this character's performances. The writing has always been exceptional, but let's stop hating on a guy who has done his job.
on January 26, 2012