Do Not Mess With Democracy in New Hampshire 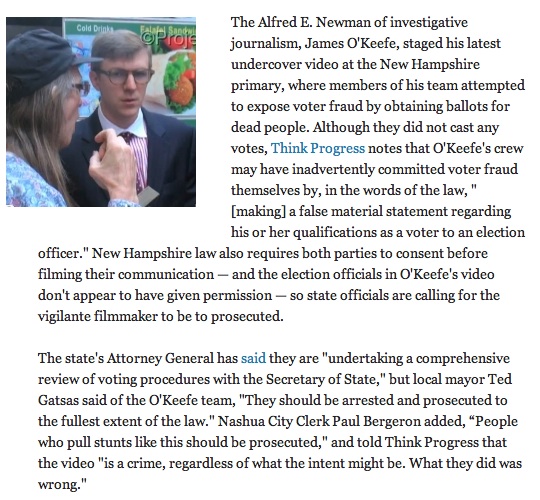 I think that this about sums up where James O'Keefe is headed. Certainly not to jail or anything like that, but he is headed for obscurity because he and his associates simply cannot come up with a second act.

The reason why I don't think he faces legal jeopardy (beyond a slap on the wrist fine) is because New Hampshire is a conservative state and enough conservatives will bail him out. Someone will lend a hand and get him and his associates a scolding and probably not much else. If anyone tries to throw the book at him, they'll claim it is based on partisan politics and so I don't think much will come of it. I hope I am wrong, though. It would be fitting to see him in jail for a while.

New Hampshire is a very civic-oriented state. People know their laws and they are accustomed to the rituals of democracy. Serving on election boards and participating in the New Hampshire Primary every four years is part of the DNA of the state. People are energized by it. Culturally, they get what civics are about in most of New Hampshire. This didn't enter into O'Keefe's calculations, apparently.

If this does energize conservatives and liberals in New Hampshire to go after him, then it would be based on that civic pride that is evident in New Hampshire when it comes to things like this. Also, people don't much like seeing the names of their dead neighbors used by smartasses to make videos.

Is there anything more odious than O'Keefe, Andrew Breitbart, and Tucker Carlson snickering about how they "did it again?"

They didn't do anything this time except pull down their pants and use their ass cheeks to stir up a hornet's nest.