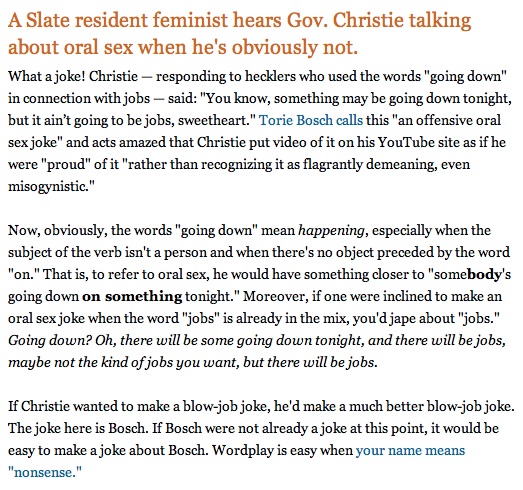 Ann Althouse does a stellar job of trying to defend Christ Christie after his ill-advised oral sex threat to a female heckler. The problem is, Althouse seems to hinge her argument on the transcript and not the tone of voice that Christie used.

Having watched Christie make his comments, let me say that Althouse is technically correct but culturally wrong in her assessment. Christie is speaking in a tone of voice that is appropriate for a political rally. He is emphasizing things and speaking to the crowd like a politician does when they're selling ideas. When the female heckler is heard, but not seen in the video, Christie's demeanor changes almost instantly.

The transformation from selling to being sarcastic happens quickly. From there, Christie shifts from politician mode to a kind of "tough guy" stance that is at once threatening and mocking. This shift in his tone of voice can be heard when he says what he says. It is true--his language does not specify the perjoratives "going down on" or "going down on something." But his tone of voice is unmistakeable.

His tone of voice is the real issue here. His careful words are modified by the cautious part of his presentation. He understands the moment and the context and so his brain is reminding him not to be overtly crude. But he is operating as if it is safe to be condescending, paternalistic, and threatening because he has the crowd on his side, and the crowd got on his side as soon as he changed his demeanor. The crowd now expects a zinger and Christie is smart enough to create a zinger that will satisfy them.

This is where Christie shifts into his "sweetheart" tone of voice. The line is delivered in an unmistakeable tone of voice. The crowd is beginning to anticipate a payoff and Christie knows that, as a public speaker, he has a chance to blow the doors off of the joint. As a man, he is now going to tell a woman something she does not want to hear (and the crowd knows it is vaguely naughty, otherwise they wouldn't have reacted the way that they did). This implies that he is going to make her do something she doesn't want to do; this is where the "going down" is directly modified by the term "sweetheart" and that's the catch in his voice that tells the crowd "I just said something naughty and you can laugh now." When you combine those terms and say it the way Christie said it, it gets a big laugh but it is, in fact, an oral sex reference. If it were, in fact, tamer and less specific, the crowd would not have reacted the way they did.

The crowd, in other words, proves Althouse is culturally wrong because they loved his line. His zinger was a winner. The woman was put in her place.

Men have spoken that way to women for years, not just through the popular culture but throughout all facets of life. When you say "sweetheart" to a woman you do not know in public and reference "going down," it is well understood that you're going to make her do something unpleasant that she doesn't want to do, which is the same as blatantly saying "you're gonna blow me." The actual transcript Althouse is analyzing doesn't lead you to that point easily; without the context provided by Christie's tone of voice, one could easily spring to his defense. But, the crowd is the thing; the crowd heard something naughty, a zinger that put the woman in her place, and they rewarded Christie with a warm reaction to his idea of forcing the woman into an act of oral sex.

That's why people who understand how men talk to women when they're putting them in their place heard an oral sex reference. Althouse is simply using the transcript to rush to a defense that ignores his threatening and condescending tone of voice and the payoff from the crowd. That's a mistake.
on January 10, 2012