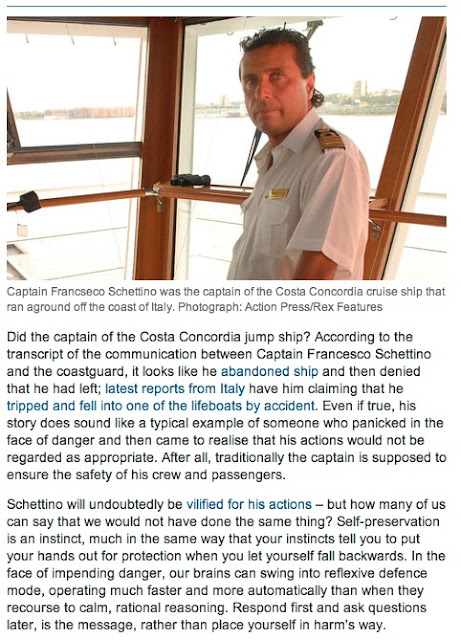 Bruce Hood seems to want to operate from the assumption that professionalism and integrity mean nothing. By using the "fight or flight" analogy, he fails to make a serious argument.

The Costa Concordia was a modern cruise liner and was, therefore, a major responsibility. Schettino demonstrated that he was an incompetent master of his ship. Not only did he take the ship into dangerous waters for the sake of vanity, he failed to ensure that he was safely passing through an area known for danger. He then failed to ensure that safety protocols were followed and lost control of his crew.

There are plenty of "captains" at sea who would have done their job properly and avoided transiting an area that has been known to wreck ships for several millennia (I wonder who his Etruscan counterpart was before there was a settlement called Rome). Hood's argument fails to merit consideration because there are a multitude of serious, sober professionals who would never place themselves in such a situation. And, if they were placed in that unlucky spot, they would have acquitted themselves properly. There will always be shirkers and bad captains; there are still plenty of goods ones who are forgotten because, well, doing your job the right way every day means you get to fly under the radar and get taken for granted.

This was not a military ship nor was it your average, run-of-the-mill seafaring responsibility. And so the real blame lies with those who entrusted such a grossly unqualified man with the Costa Concordia in the first place. This is why much of the blame and the lion's share of the vilification are being directed towards Schettino--in doing so, people forget that his employers should never have given him the job in the first place because he has done this sort of thing before. It fails to acknowledge that Schettino was likely promoted for his charisma and his ability to flatter his employers; somewhere, an Italian ship captain with far less responsibility is no doubt exercising vastly better judgement.

Hood fails to understand that Schettino was not "one of us." He was not a third-rate opinion column writer in the dying British media industry. He was not an idiot blogger living in Germany. He was not a crusty boat captain with a handful of desperate crew members. He was entrusted with the safety of several thousand passengers and over a thousand crew members. And he proved himself to be in over his head and unable to cope with a crisis that he caused in the first place.
on January 19, 2012