A Failure of Command 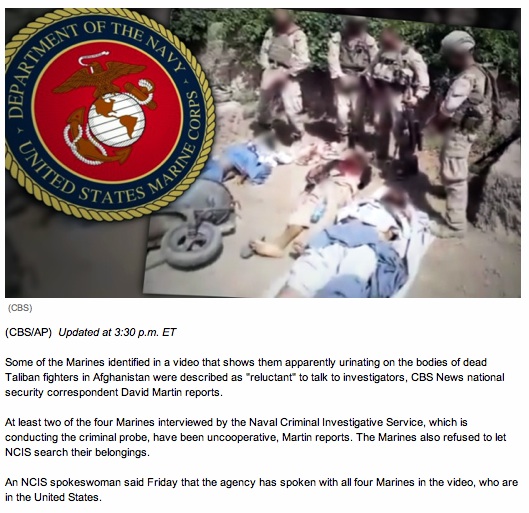 I've held off making a definitive comment on this incident because I really don't enjoy seeing stories like this in the media. There are always going to be examples where members of the military do things that are illegal, immoral, or just plain stupid.

You can apply all three of these things to what happened in the video. The illegal aspect is found in several areas--desecrating the dead violates the laws of war and this is a pretty clear example of conduct unbecoming of a Marine. It's immoral because this is not a video you'd show your mother (that's a wonderful standard by the way, and it should be applied each and every time you put something on YouTube). And it was a stupid thing to do. You have to ask the Marines in the video one question. What did you think would happen if this got out there?

Having said all that, there are some ridiculous ideas out there. Having served in the military but not in any war zone or in any capacity beyond occupying a chair because that was what we did (mostly) in my MOS, I can tell you that the ideas that are being perpetrated strike me as being the sort of stuff that chickenhawks bleat about when they want to act like they know something. Yes, war is hell--thanks for sharing. And bullets and blood and guts and all that really are unpleasant.

The main one that floats around out there is that these Marines are desensitized to the violence and the brutality of war and are just doing what all soldiers and Marines have done in war. There are certainly examples of this, but many of them have been enhanced by how we've viewed past wars through the popular culture. It brings to mind Robert Duvall in Apocalypse Now tossing down 'death cards' or Marines in World War II desecrating Japanese corpses as depicted in The Pacific.

However, what people don't realize is that the vast majority of soldiers and Marines have never desecrated a dead enemy's body or done anything like that. Quite the opposite--the tradition of the United States military has been to be respectful of the enemy dead and to punish anyone who engages in this sort of behavior. This is instituted at the command level and good leaders have always kept on top of incidents such as this. Bad leaders and poorly led soldiers always create problems, and this is just one example.

Repeated deployments are breaking the military--there is no doubt of that. But, on these deployments, again and again and again--good soldiers and Marines are doing their job without resorting to stupid things like this. Watching the media often enough will leave you with the idea that the military is full of loose cannons and people who are unprofessional. The opposite is true. The military is relentlessly and tirelessly professional, and that is because of the non-commissioned officers. In this video, you see an example of when the NCOs are not providing the reality check that is needed to stop things like this from happening. Nothing provides the framework of a professional military more than having one NCO keep other NCOs firmly in line. These men could have used one good NCO with the common sense necessary to stop this from happening. Officers are important, but NCOs are vital. And someone vital should have been there to stop what went on.

What you see in this video is an example of a breakdown of discipline being applied to a situation that no one was ever supposed to see. If they had had YouTube during the Vietnam War, you would have seen stupid things such as this video. It doesn't show pride; it shows contempt for the enemy. Someone had a half-bright idea and filmed it; that does not, in and of itself, mean that it's okay to desecrate corpses nor does it mean that it is a commonplace thing. I find it hard to believe that these trained snipers were operating with such contempt for their enemy. I would think that, for the majority of men who do that kind of work, the opposite would be true.

Anyway, you will hear a lot of tough guy rhetoric when it comes to this incident, and I'm not going to add anything more to it. The Marines will deal with this and that's that.
on January 13, 2012