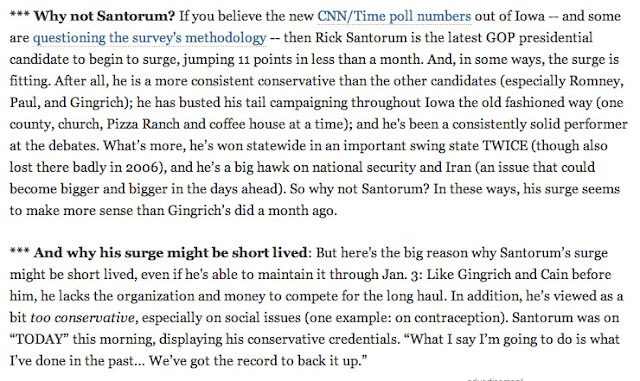 It should come as no surprise whatsoever that there really isn't any "analysis" happening here. There has been a bump in poll numbers in Iowa. And Rick Santorum has been bumped up eleven points.

A real analyst would say, "wow--what a weak field of candidates."

Because that's the only lesson that can come from seeing Rick Santorum rise eleven points in a poll before Iowa goes to the meeting house and divides up into weird little groups and fails to choose a nominee who can win anything in a nationwide race (ask President Huckabee how that works).

This is a state that once gave Alan Keyes 14% of the Republican vote. Don't expect miracles--expect insanity. You know, the kind that runs down the highway naked with toenail clippers fastened to the nipples and trails a string and fifty-six cowbells. That kind of crazy.

Thirty-three and one third percent of the American people will always vote for someone who is certifiably insane, no matter who they are and what party they are from. One third of the American people throw their vote away every single time less than fifty percent of them can gin up enough civic courage to go vote. And, every time they do, "analysts" like Chuck Todd think it means something.

Tell me who has command of that slice in the middle everyone covets--the one that will beat President Obama next November. Tell me who has a shot at that. Does Rick Santorum really think that his career of not getting re-elected to the Senate and being a complete and utter phony and being a family conservative so far to the right that he opposes a lot of things Americans are beginning to embrace (gays, abortions, being normal and well-adjusted, etc.) will win him anything beyond that one-third of the insanity vote? If he does, then check his meds.

Really, who has a shot at winning next November? Any of these people? No? Then quit pretending an eleven point bump means anything. Because it does not.
on December 29, 2011