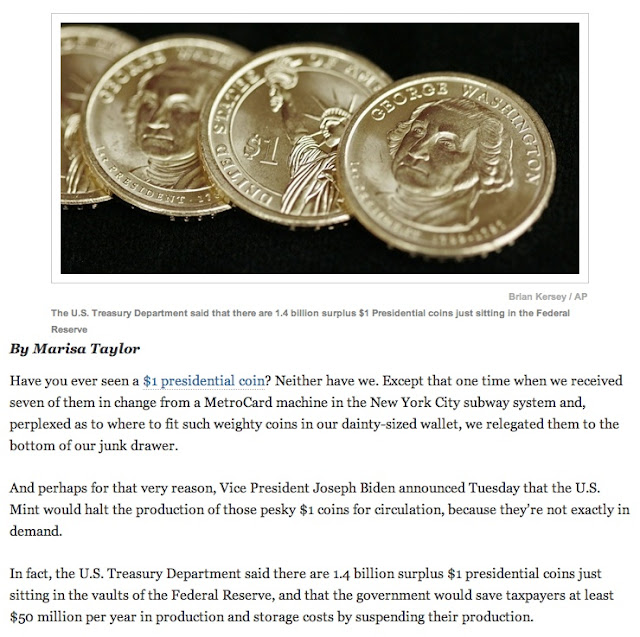 In my lifetime, there have been several attempts to get people to use a one dollar coin. I don't remember getting too many of the Eisenhower dollars, and they ended up being popular in casinos. The few that I did get were no big deal.

I was once paid six silver Eisenhower dollars to mow some jackass's lawn; I did it exactly once and he made me rake up his grass because he was too lazy to do it himself. He was completely and utterly out of control on either dope or psychedelics, and he was a real head case. He drove around town and hollered at kids as if we were adults.  But, then again, I was raised in a town full of freaks and damaged people. This didn't upset any societal boundaries in the 1970s because people were too busy trying to figure out what normal looked like. I did not need his money and I laughed when he thought I was going to come back and cut his grass a second time. That made him even crazier. I was not more than eleven years old, if that much. Crazy adults were everywhere, and I avoided them as best I could.

I do remember, vividly, the debacle known as the Susan B. Anthony dollar coin.  Then there was that whole Sacagawea coin--an abysmal failure, featuring some poor woman trying to carry her baby and get away from the bearer of the coin. They have all failed. Nothing failed worse than the two dollar bill, but you get my drift.

When we arrived in Europe over a year and a half ago, we were confronted with the reality of the Euro monetary system. Coins of denominations ranging up from one euro penny, then two, five, ten, twenty, fifty and then, wonderfully, the one and two Euro coins.

The ones and twos are the best coins ever. They are silver in the middle and gold around the edges. They are the handiest things ever.
on December 13, 2011