The Collapse of Michele Bachmann 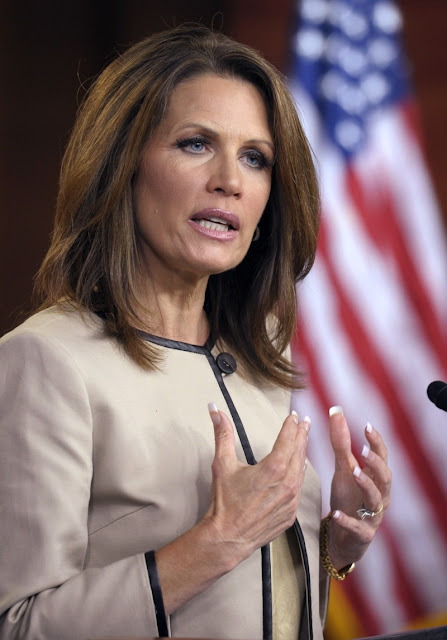 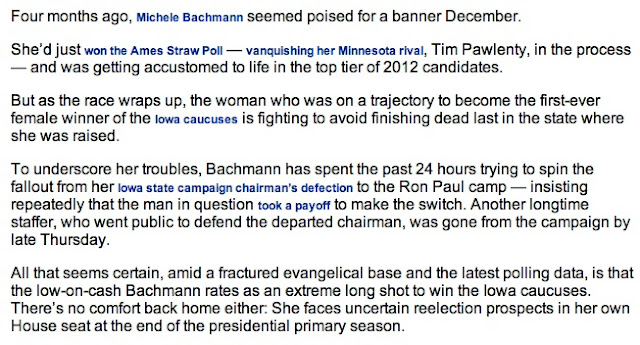 They are writing Michele Bachmann's political obituary and what is missing from all of this supposed analysis are the very real issues that accompany her downfall.

Her lack of support on the Republican side has meant that there are few, if any, Republicans who are buying her version of crazy. The other versions of crazy that are selling right now come from the likes of Mitt Romney and Rick Santorum. And that's fine--the marketplace of ideas is where you perish or fail.

But the example of Bachmann is an interesting one because I think people are going to examine her failed campaign for decades to come. She ran as a conservative woman and as a proxy for the likes of Sarah Palin; the electorate has largely rejected both of these women and their ideas. However, the path to that rejection has been lined with numerous sexist references and attacks. Both Bachmann and Palin have been attacked for their physical appearance; both have been attacked and humiliated for their family situations. Much of this has derived from their reprehensible positions on gay rights, and the vitriol of this lobby is such that you cannot expect any middle ground. There are, literally, so many attacks that linking to them all would be a fruitless effort, and putting them into perspective is difficult because there have been so many savage attacks that lining them up and ranking them would consume weeks of research.

The problem with these attacks is that they cloud the real issue, and that is, neither of these women had any shot at the Presidency to begin with because their core positions and capabilities were not up to the job. When a woman arrives on the scene with the right positions and capabilities for the job (Hillary Clinton certainly had them), how can anybody reasonably assume that she's going to be treated fairly, given how Bachmann and Palin have been treated? How can there be a credible pushback against those sexist attacks given the fact that a number of them derived from people who should have known better?

This leaves future candidates with a problem. What happens when a woman with some substance and ability runs in a future election and begins to find some traction with voters. What will happen when she is, hypothetically, subjected to the same sexist attacks that Bachmann and Palin have been subjected to?

I think the answer will be a shocking one--we will lose the best candidate for the job solely because it has been open season in American politics to destroy women by any character assassination means necessary.
on December 30, 2011