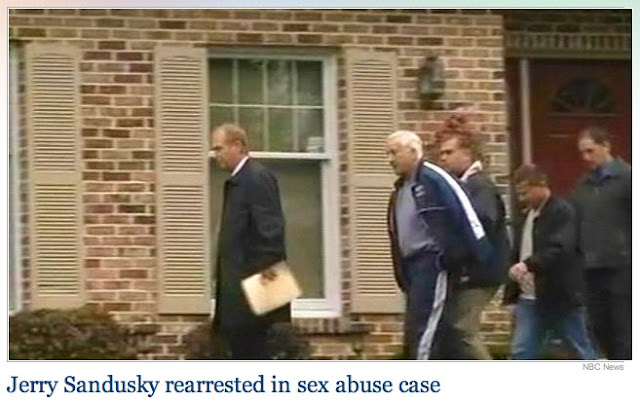 What I find incredible is that there is a tremendous amount of testimony that clearly identifies Jerry Sandusky as a dangerous predator of children. There are consistent patterns, corroborating witnesses, and a growing amount of evidence. We now have ten identified victims who are appearing before the Grand Jury to speak about what this man has done. He's not a coach anymore. Why does he still dress like one? How is it that he has been able to live in his own house, out on bail, with all of this swirling around him?

Innocent until proven guilty? Yes. But a clear and present danger to society until we can determine whether or not he is guilty? Absolutely. I don't know why they didn't put him in protective custody a long time ago.

The rule of law in Happy Valley is a charade. Everyone who knew what he was doing should be arrested as well. They are guilty of ignoring basic decency and the law.