STRATFOR is Taken Down 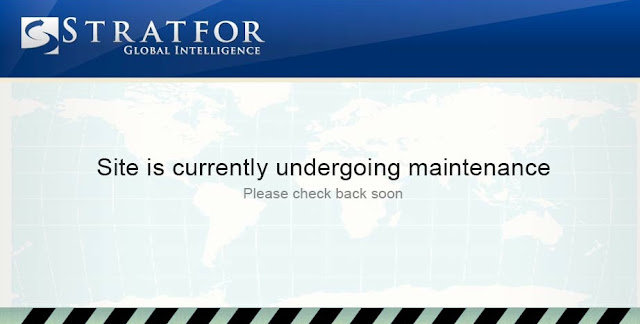 Several years ago, I was impressed with the quality of the work that STRATFOR was doing. They were putting out good articles and doing fairly good work as far as researching things and whatnot. I was particularly impressed with their work on Mexican drug gangs and things of that nature, so I put it up. That well went dry quickly; they were good but not particularly insightful. During a crisis on the world stage, I wouldn't even bother going to their site because whatever they would have would require membership and things of that nature. Specifically, money, and I don't pay for information. I just don't need to.

But STRATFOR was never a "go-to" source for me; I don't think I've linked to them more than a few times, and not in the past two years or so. Their business model has been "pay for what we tell you" and I'm not interested in paying for what it was they were selling. Hence, I'm not being affected by this. They have an old E-mail address, but I did not have an account with them. Whoever did is now sweating bullets.

This sort of thing reflects badly on their organization, but it really shouldn't. All it takes is for one employee to leave the network vulnerable by using a poor password or for one mistake when it comes to establishing security and the whole operation can fall apart.

STRATFOR has fallen apart, and their members are being humiliated and charged money. This may very well destroy them, or at least cripple them and cost them millions in funding. You cannot hold yourself up to be a cutting edge research operation when it would appear that a few hackers have put you squarely on your ass.
on December 25, 2011