Stealing Copper is Not a Great Bromance Activity 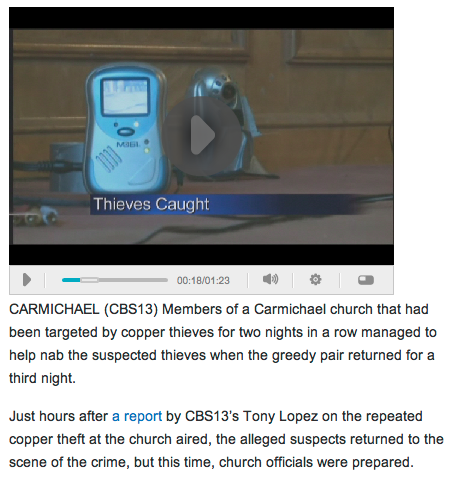 Here are two articles about some bros out stealing copper. In this one, two dudes in California got caught by a church using a baby monitor when they went back a third time. In this one, three dudes were tearing up a school in the middle of a Sunday night and tried to pass themselves off as working on a remodeling project (yes, at night, with flashlights). There are probably fifty more stories like this out there.

Is this what you want to be doing when you're hanging out? Stealing copper wires and pipes out of buildings?

In the first place, you can get electrocuted. Or, you could cut through a heated water pipe and end up scalding yourself. Plus, there's that whole thing about being arrested and tried and convicted of theft. Those are all pretty bad. On the upside, yes, selling copper to metal dealers can get you some beer money.

At the end of the day, if you suspect that you and your friend and one other buddy are going to end up stealing copper, don't. It would be much easier to sell your plasma or hook up with an old lady who has a lot of money.
on December 04, 2011