Saudi Ban on Driving Protects the Innocent From Shame 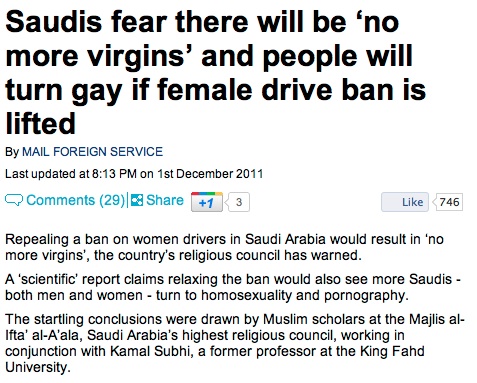 Given that this comes from the Daily Mail, you can just about imagine how hilarious this subject is in the wingnut press. The problem is, there really is no such thing as a "Muslim scholar" in that there is no one, true interpretation of the holy book of Islam nor is there a church hierarchy (such as what we have with the Catholic church). There are aspects of Saudi society that exist in the 21st Century and then there are aspects that reside firmly in the period of about 1200 AD. Never the two shall meet, especially since the elites in Saudi society just ring this dinner bell for the saps who have to subsist on mere small fortunes.

These scholars could be anyone. This is like saying that a Christian Scholar (someone who gradjimated from Kentucky Mountain Bible College or Bob Jones University) has decreed that walking around with three rolls of quarters in your front jeans pocket will lead to unwanted advances from old ladies and middle-aged Republicans. It's hogwash.

America's foreign policy should stand up for women all over the world. The rights of women are violated everywhere, both at home and overseas. That the Saudi government would allow religious fanatics to come up with such embarrassing nonsense is an indication of the fact that they just don't care. They don't want to be like us, they don't care if they appear Medieval, and they have no regard for human rights. A foreign policy that can deal with that sort of thing would be nice to have right about now, and thank God for what we do have. A few years ago, there would be no engagement on this issue. I would hope that our current Department of State has some sort of comment or policy on this, especially for American women who wish to drive in Saudi Arabia.

Currently, I'm not aware of an American ban on Saudi women drivers. If someone has information on that, please let me know. And, yes--I do know that if you're caught driving in Alabama, you can be charged with being a dadgone furriner. I get that.
on December 02, 2011