Louis CK Shows Us a New Way of Distributing Content 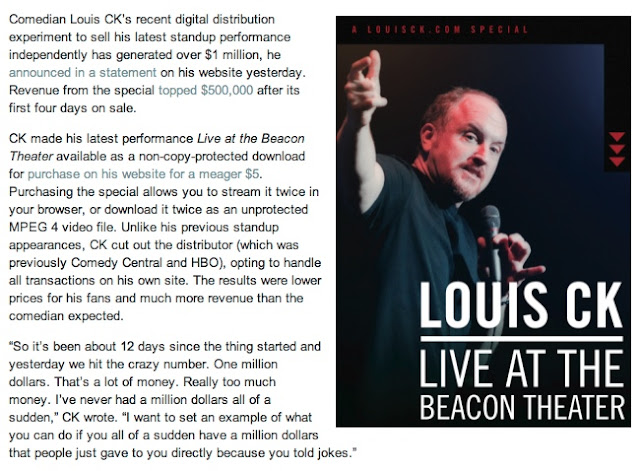 There are a lot of things to like about what has happened to Louis CK recently. It's great, first and foremost, to see an artist get paid. That's the thing that jumps out at me. An artist who does things for his fanbase has just been allowed to make money from the thing that he does that they want to pay five dollars to see. This is the shrinking of the content delivery conundrum down to a manageable size. This is Louis CK shrugging off the need to have someone back him up and make him look like a real artist; he can now operate with whatever tether he wants, and that can be to a content company, a website, or a major corporation. He is free to do whatever he wants.

And what he wants is for you to pay five dollars to see him do standup. It's not hard to figure out. He does this thing, and you want to see it, so give him the money.

The technology has been there for a long time. The means to get this out there has been there for ages. But what has happened is that there are now social media outlets that can publicize what the artist has done, and it can spread the word of mouth around to an extent that allows an idea--a piece of content--to catch fire and grow of its own volition. This did not require publicists, ads, and one-off blurbs in magazines or on websites (although those things haven't hurt after the fact).

Let's say that Louis CK had done this five years ago. In the pre-Twitter and pre-Facebook age (or at least when those services weren't as large or dynamic as they are now), perhaps he does a fair amount of business letting people download a show. But, without thousands of followers to reshare and repost the offer with their recommendation, it is highly likely that it would not have brought in a million dollars or more.

His business model then would be more akin to what happened when Radiohead put an album online and let people pay for what they wanted. That did not lead to a revolution--it simply allowed a lot of people to get a copy of In Rainbows for whatever they wanted to pay, and for a lot of others to get a cheap copy (remember, Radiohead wisely only allowed a low bit-rate version to emerge, not a high-end version of higher quality). Now, he can put out DVD quality content (a video as opposed to an audio recording) and he can rely on thousands of others to promote his work, effectively taking the place of a record label or a distributor.

What's brilliant is that he decided to bypass the companies that have already put at least three (that I know of) DVDs out there in the marketplace. I can go to the AAFES Post Exchange (PX) and buy at least two of those programs for ten dollars apiece. They are in the "discount bin" and they are overstock productions of work that you can see on YouTube for free. They're also about an hour in duration,

But there are other factors at work here. Louis CK is a comedian whose time has come. His television show on FX is groundbreaking for how simple and elegant it is. He is a filmmaker first, and a comedian second. Were it not for the unfair treatment of Pootie Tang, Louis CK is a guy who would be making films every other year right now. He gets visual presentation and artistry in a way that most comedians do not. He has spent over two decades building a following that is loyal to him and that is now more connected to what he does because of social media. And, this was his first real attempt to take his content and put it in the hands of people who want to see him do standup.