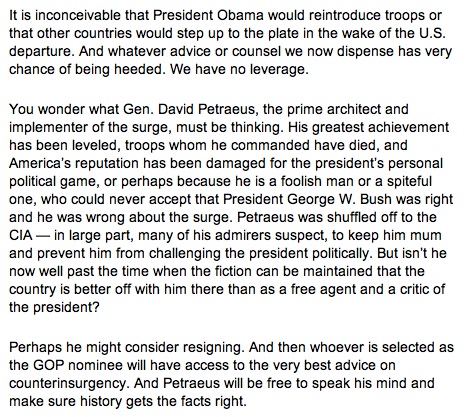 Who hired this insane woman?

General Petraeus was not "shuffled off" to anything. He was named the Director of Central Intelligence. That is not a consolation prize, nor is it a booby prize, nor is it small potatoes. It is the stepping-stone to bigger and better things. Witness the ascendancy of Leon Panetta to his current position. At one time, a President could count being CIA Director on his resume. Petraeus, having absolutely no experience whatsoever in intelligence, was given this position largely because it was the one he probably wanted. I have no doubt that, no matter who is elected in 2012, he will be the Secretary of Defense by the summer of 2013.

General Petraeus also knew that this is the outcome that Iraq was headed for. America was never going to "win" in Iraq and America was simply buying time to allow one presidential administration to give way to another. This was evident in 2007 and it is no surprise to anyone, ahem, who is sane. And Jennifer Rubin is not sane.

Her derangement stems from the fact that no one wants to pin the blame on the Iraq War where it belongs--on the record of George W. Bush and the people who served him.

Rubin knows nothing. Nothing. She is a shrill, insane, shrieking madwoman who has been handed a prime piece of real estate.
on December 24, 2011