Jennifer Rubin Does Not Understand the Power of Lobbying 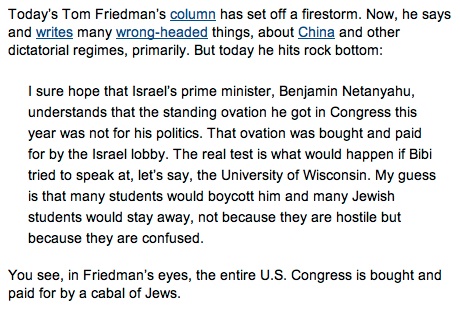 The problem with Jennifer Rubin's logic is easy to explain--she doesn't understand the power of lobbying, so she goes right to the jugular with the usual name calling. I suppose she either didn't find the moral courage to call Friedman an anti-semite or was warned not to, but, in any even, Mr. Friedman is emphatically correct and Miss Rubin is utterly wrong, and it has nothing to do with harping about a "cabal" or anything like that. Her post was written with such invective that she muffed the first three words, of course.

Lobbying is an intensely powerful force in American politics right now. The Israel lobby is no different than any other lobby. As an employee of The Washington Post, Rubin should understand how lobbying recently helped the bottom line of the company that pays her. Thanks to the efficient lobbying on behalf of the Washington Post's Kaplan educational rip-off, the Federal government has decided to come down as softly as a feather on corrupt diploma mills who operate as for-profit companies that know how to promise one thing and give something else to people who are desperate to improve their skills and get a job. Kaplan is one of those diploma mills, and they have traded on their ability to wring money out of fools who are told that if they get an Associates Degree in Business Administration or whatever else that they will get a good job.

This Congress responds to money. It doesn't represent anyone who doesn't have money. It is driven by a need to raise money in small amounts and to do so is to risk the armageddon of not getting reelected. Tom "suck this" Friedman is simply the pig finding the truffle and the stopped clock that is telling the right time twice in one day. He's late to this realization and now he has to contend with Jennifer Rubin, who is having a sad because someone is pointing out the truth.

Tom Friedman doesn't know what he's talking about, by the way.