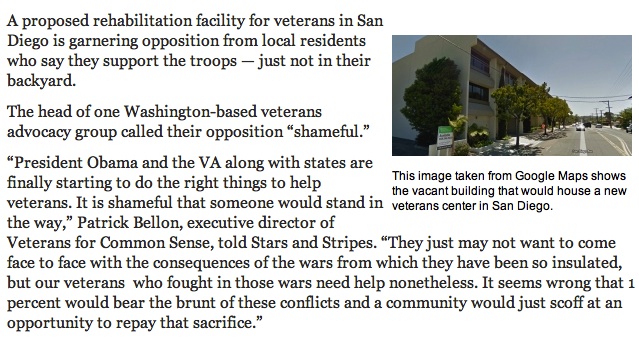 Forget the reduction of our footprint abroad--it's time to bring our troops out of San Diego, and for good.

It's time to pull the Marines out of Southern California and it's time to base our naval forces elsewhere. I don't care where; but not in San Diego and never, ever again.

This isn't just a small or minor incident; this speaks to the continuing and somehow relentless assault on military personnel from San Diego. They hate the military in San Diego. There is no other word for it; they hate the sailors and Marines. They put up signs in their shops telling them to stay away (or, at least, they did before 9/11). No other community in America hates on the military like San Diego. Let's bring our troops home from this ungrateful place and leave it to whatever wants it. Let's get out of that place.

Having military bases near your city is a benefit, not a burden. The Federal dollars that flow in are hard to explain, but when you put a military base in a part of the United States, what few negatives there are get swept away by the benefits in terms of having professional, well-paid people serving their country in your community. Explaining that to the idiots who run San Diego has never been easy; they don't get it. Having a rehabilitation center located where there are tens of thousands of Veterans is a benefit, not a burden, either. The addition of good paying jobs should be enticement enough; having to share the sacrifices made by so many Veterans is something that San Diego should embrace and not push away with disgust.