Hatin' Doesn't Come With a Payday 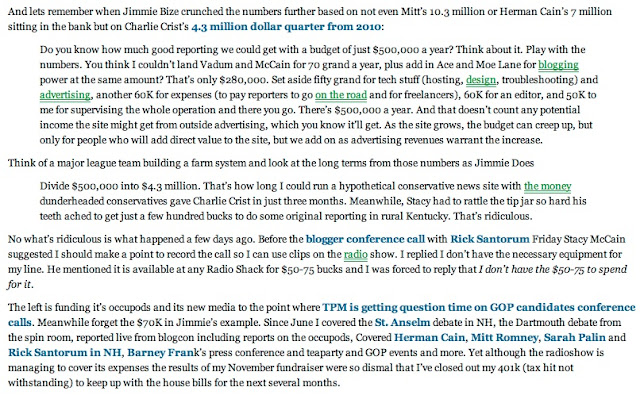 This is an interesting view into the world of the conservative blogging world. Here we have Pamela Gellar (I don't link to hate sites because the marketplace tells me not to do so) complaining about the fact that the marketplace has rejected what she is selling, as well as what other conservative bloggers are selling. If you believe in capitalism and pulling yourself up by your bootstraps, this has to be a mighty kick in the pants. The doyenne of Ayn Randism is hard up for cash money on the barrelhead. She doesn't have fifty bucks for a phone gadget from Radio Shack? Well, you'd better hit that PayPal button, Smedley.

Here's how stupid I am--I thought that her site, and sites like it, were awash in support and cash. They have rabid, loyal followings (albeit, one that is brokedick and wants everything for free). Apparently, ad revenues don't pay the bills, even if you see tens of thousands of hits per day on your site. I couldn't view Gellar's daily stats; they are screened off. But here's what Alexa has to say, when you compare three conservative blogs to DailyKos.com: 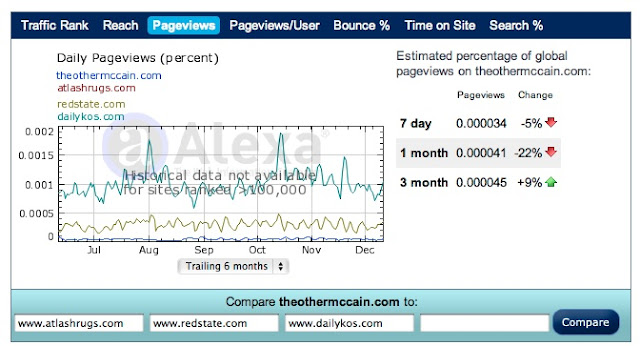 The marketplace has all but rejected what Atlas Shrugs and The Other McCain are offering. Atlas Shrugs doesn't even register with Alexa's system, so there's no way of knowing what the actual numbers are. On any given day, Daily Kos beats all three blogs combined, even though there's little or no interest in defending the Obama Administration anymore. Perhaps Daily Kos is offering substantive dissent and information that cannot be found elsewhere? Who knows.

But, getting back to the money angle, if this is how traffic looks to an investor or a businessman, then there's no way that a donor or a beneficiary's pocketbook is magically going to open up and rain dollars on someone who has been rejected by the audience for political commentary and debate. There is, clearly, a lot of resentment for the fact that the business model adopted by TPM and Daily Kos has succeeded. Of the three sites that I used to compare to Daily Kos, only Red State comes close to approximating the same business model. Both sites are community forum based; users can rise or fall within the community based on the quality of what they have to offer. However, Red State harshly censors dissent and, at least as far as I know, refuses to tolerate pro-Ron Paul sentiments. Daily Kos certainly censors content through community shout-downs as well. The other two blogs generate commentary and I don't know how tightly those are moderated.

With a few thousand visitors per day, any blog can be sustained by readership support. This can be done in two ways--through ads and through donations. A third way would be for independent financing of some kind, but the more grassroots support would be found through a contract with the users or visitors--click the ads and make small donations in order to support the content carried on the blog. Twenty or thirty ad clicks per day can certainly add up. If you figure that a single click can be worth as little as a dime and a much as a dollar, monthly support for a blog can be anywhere between $300-400 per month. That's more than enough for a Blogger Blog; all I pay for here are the twice yearly fees to the domain registry. If one hundred visitors per month kick in ten bucks, that's a thousand dollars for Radio Shack gear and gas money.

Now, my business model won't win any awards. I do this essentially for nothing. What little money is generate from ads supports the registry fees and not much else. But, that's okay. I have never, ever asked for donations and I don't think I ever will. I have never put up a PayPal button, and that's a personal choice. If the marketplace doesn't want what I'm selling, then I'll just keep trying. I offer twelve or fifteen blogs (come back in a month; that number seems to change on a whim) that I, and I alone, use to spread whatever it is I'm spreading out there for all to accept or decline. No matter what, I'm going to draw my stupid pictures and say stupid stuff and have more fun doing it than anyone probably should. I do it for the Lulz, I guess. Oh, and the creative outlet is worth more to me than filthy lucre.

One of the things I learned when I started blogging was that if you don't put ads on your site, people think you don't know what you're doing. Ads are a great way to make a little cash, but they make so little cash that they really aren't worth the trouble unless one of your pages goes viral and gets 30-40,000 hits in a day. So, I don't judge people who put up ads. They signal the reader that this a blog where the creator or curator knows how to interact with the different modules.

I realize that what I've outlined above isn't big time money, but why does it need to be? Why do you need to make more than $1,200-1,5,00 or more per month from a blog? Who gets into this thinking it's going to be their full-time job, given that it isn't for commercial purposes? Gellar resents the fact that TPM is getting on conference calls to ask questions of Republican candidates. Well, why isn't she getting on those calls? Are they afraid of her off-putting questions about American jihadists masquerading as Democratic Congressmen and her ability to go off on unhinged rants? Sitting in on a conference call costs nothing; clearly, TPM's coverage and fairness have been embraced by the marketplace. Gellar's offerings aren't even registering with Internet users.
on December 13, 2011