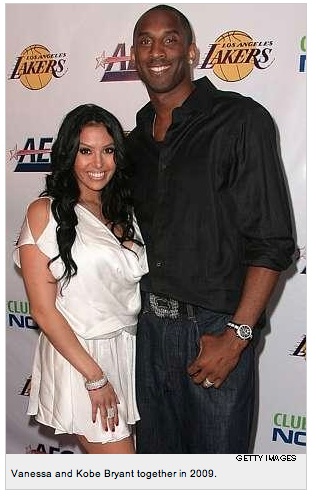 While I don't foresee Systems of Bromance becoming a massive blog anytime soon (perhaps in the months ahead?), this is an important forum for ethics and social practices. This next case will probably provoke a lot of debate, should it ever catch fire in the way that I suspect that it will.
Say you're a professional athlete, and you enjoy the company of women who are not your wife. There are already various protocols established for men who see other men--teammates, or, in some cases, opponents (but fellow members of the Players Union). But, what protocols exist for the wives? Or girlfriends?
I bring this up because of a piece of gossipy trash: 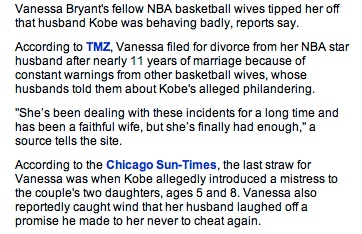 Now, let's be up front--this is all probably speculation. Pinning this on the warnings of wives lets a lot of people off the hook, Kobe Bryant, for starters, and the husbands as well. Is that right?

What if you had a vested, competitive interest in seeing Bryant miserable? What if you knew that your wife had information about Bryant and you did nothing while she passed it on to Bryant's wife? There you go--that's where it gets complicated for teammates, bromances, and professional relationships.

In the case of professional basketball (expand this to other sports, I suppose, and things get even more complicated when there are over 20-30 players rotating in and out of baseball and hockey clubs, and when there are over 50-60 pro football players to consider), there is a tightly-knit group of twelve roster players and maybe a few others who might rotate in or out depending on trades and injuries and whatnot. These are all individuals who have to be handled as professional relationships. With them, comes their personal relationships and, to be specific for this case, their wives. Do you have a responsibility as a teammate or friend (or blood enemy) to those other players to make certain that your own wife is not passing information to their wives, or vice versa? Do you have a vested interest in making certain that what happens on the road, stays on the road, or what happens during team outings or gatherings is kept private?

Do you have an obligations to make sure that your wife isn't ruining another man's marriage by trading on information? And will this become an issue when it comes to trades, acquisitions, signings, and contract negotiations in the future?

Or am I missing the fact that this has already been an issue for decades? I think the latter is probably more likely.

In any event, so long to Kobe Bryant's enemies. I think he'll figure out how this all unraveled, and he'll get rid of the culprits. He always does.
on December 23, 2011