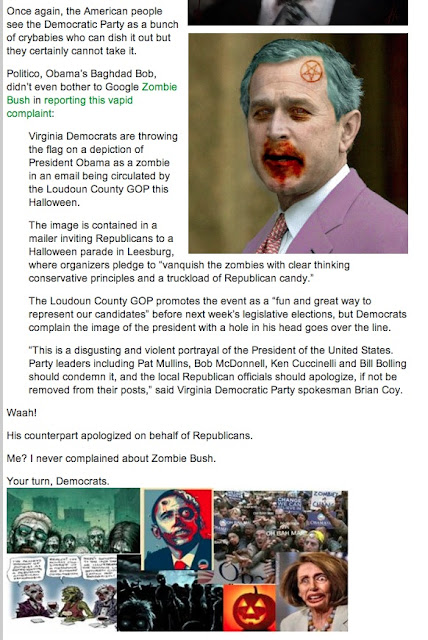 First of all, if the "Zombie Bush" images were created and distributed by members of the Democratic Party, either at the state or national level, they should have been fired on the spot and condemned for their actions. That sort of thing has no place in our political discourse.

Second, the image of President Obama came from the Loudon County Republican Party. They may not have had the talent to create the image, but they put it out with the legitimacy of their offices and affiliations. Artists who create these images are free, in our society, to express themselves, no matter how horribly or tastelessly. Their "threats" can be handled by the appropriate authorities if need be.

What Don Surber doesn't understand is that you can't say "but Democrats did it too!" because no sensible Democrat should have allowed themselves to be affiliated with "Zombie Bush." The image was appropriated and used by the Loudon County Republican Party offices. My personal condemnation for any and all who engage in that sort of thing is without equivocation--this is wrong and this is beyond the pale. If the Loudon County Democratic Party ever did anything like this, I would condemn them as well, and I would hope someone would get fired. I suspect someone is going to get fired over this. If not, who cares? It's not like anyone expects class or dignity in our political discourse at this point.

Surber wants to make this about "both sides have done it!" but what he fails to note is that no one really believes that foolish argument anymore. Democrats are much quicker to condemn their own than Republicans. Republicans are too quick to cross the line and smear people and use this kind of eliminationist rhetoric because they are afraid of looking weak.

It is not weak to identify bullshit and act accordingly. Every day, someone does something stupid on the Internet, often before breakfast and always with their ass hanging out. I am certainly one who knows just how ridiculous it is to try and defend the Democratic Party because it has perfected the art of stepping in massive piles of shit on a regular basis. So, I'm not taking a "turn" here because there is no turn.
on November 01, 2011