Why, Eric Holder Really is Just like Jerry Sandusky 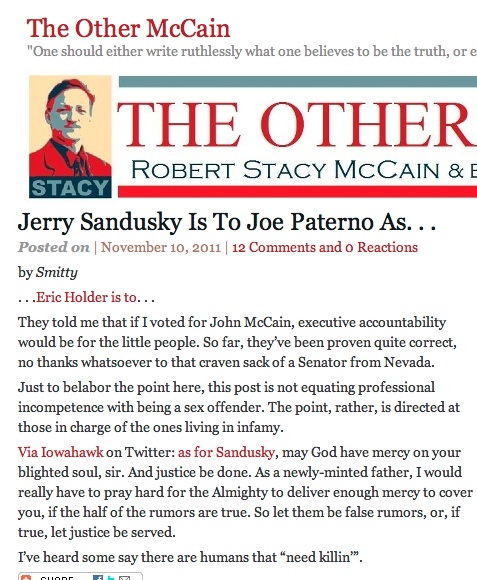 As far as I know, that's a real post. It doesn't seem like it could or should be, but, wow. There you have it. The conservative mind, circa 2011, has settled on the notion that child molesters and Democrats are pretty much the same thing. There isn't anything a Republican blogger wouldn't say or do at this point, so let's applaud Smitty's brave resolve to be the one to take that step into the brave unknown. When he says that he is "not equating professional incompetence with being a sex offender," you have to say, well, then why write the post at all? Because that's exactly what you know you're doing when you make that comparison.

That's the very definition of intellectual dishonesty. It's a point being made solely because Smitty can't think of a better way to smear the Attorney General with a random blog post.

And it's also a little like accusing your opponent of being a child molester so that he or she has to go out and say "I am not a child molester." Oh, wait. It's a lot like doing just that. See how that works? So, big blog fail to Smitty, who doesn't even get a photo of his mug put up (that's how that works when you're the flunky whose name isn't on the blog).

Of course, no sensible person would point this, this, or this out, but I digress out of disgust.
on November 10, 2011